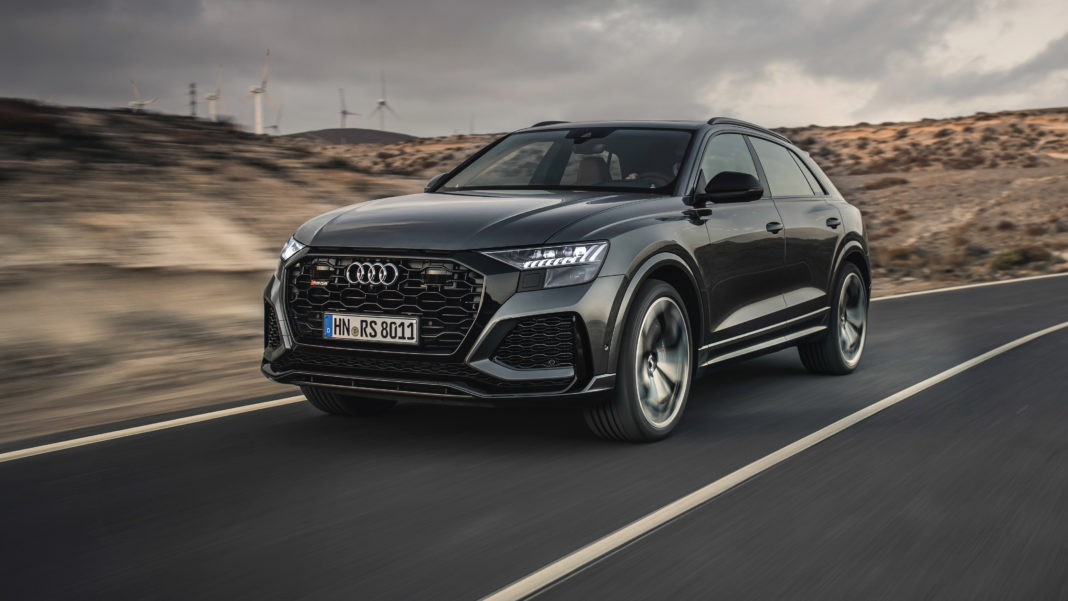 Audi’s new flagship RS offering is a vehicle of extremes; weight, power, wheel size and price among them. But it’s also an astonishing piece of engineering.

+ outrageous pace and agility; comfortable when you need it to be

– pricier than the RS6 Avant; touchscreen tricky to use on the move

Performance vehicles from Audi have long been known for their broad breadth of talents, with the archetypal RS model defined by its ability to deftly balance monster performance and everyday comfort. Does the Ingolstadt-based firm’s most extreme performance SUV yet stick to this middling formula or have the folks over at Neckarsulm tossed out the Audi Sport rulebook and sacrificed a whacking great dollop of versatility at the altar of sportiness?

Considering the RS Q8 was the fastest SUV around the Nürburgring Nordschleife (before the Porsche Cayenne Turbo GT snatched the record), you’d almost certainly think it’d be the latter. But, despite its on-circuit exploits, the hottest version of Audi’s flagship coupé-style SUV won’t pummel your kidneys into submission should the road surface turn anything short of perfect. And a gentle prod of the throttle won’t send small children scurrying in search of the nearest matriarchal figure. Instead, it sticks resolutely to the script, exhibiting Audi Sport’s signature malleability.

Yet, the RS Q8 somehow also manages to push the performance envelope. While it’s almost unassumingly docile when pottering around town, engaging the sportiest of the configurable settings – achieved with a simple prod of the RS mode button on the steering wheel – unlocks truly mighty performance from the twin-turbo 4.0-litre V8 engine. Shared within the Volkswagen Group with the likes of the Lamborghini Urus, the TFSI unit is here tuned to deliver a heady 441 kW and 800 Nm.

The result is seemingly relentless acceleration that continues well after the 0-100 km/h sprint is seen off in just 3.8 seconds; that’s a mere two-tenths tardier than its Raging Bull cousin, we should point out. As standard, the RS Q8 is electronically limited to 250 km/h, though Audi South Africa will optionally lift that figure to 280 km/h (rather than the Urus-matching 305 km/h offered in some markets) should you be prepared to tick a certain R34 100 box.

Slide your foot off the brake pedal after locking in launch control and the hulking SUV’s rear end will hunker down as it surges off the line with remarkable composure, the permanent all-wheel drive system transmitting the eight-cylinder motor’s substantial outputs to the road with very little fuss at all. Owing to the RS sport exhaust system – complete with black tailpipe trim as standard – each upshift from the eight-speed automatic transmission is announced with suitable aural vigour, though the cabin insulation is so effective only passers-by benefit from the full earful under full throttle. Back off the accelerator once you’ve run out of road (or courage) and the exhaust rumbles menacingly on the overrun.

So, it’s frighteningly quick in a straight line. But what happens when you throw it into a bend? Something astonishing, considering its size, weight and ride height. Thanks to a veritable army of clever features – such as rear-wheel steering, adaptive dampers and a mechanical centre differential capable of sending up to 85 per cent of drive to the rear axle – the 2.4-tonne RS Q8 feels markedly smaller and lighter than it is, exhibiting an entirely unexpected level of agility. Spring for the optional electromechanical active roll stabilisation system (R94 000) and Audi says it’ll corner flatter still.

The eye-widening levels of grip are accompanied by appropriately stout performance from the ceramic brakes optionally fitted to our test unit for an additional R202 000 (yes, more than you’d pay for a mid-spec Suzuki Swift). Visually distinguished by blue callipers, this uprated braking system’s mammoth discs measure 440 mm up front and 370 mm at the rear, each framed by a 23-inch Y-spoke alloy.

Despite employing the largest diameter wheels ever fitted to a production Audi, the RS Q8 rides with the sort of poise you’d expect from a luxury vehicle, even if there’s always a slight underlying firmness to proceedings. The standard adaptive air suspension system varies its reactions according to the chosen driving mode (there are as many as eight), while also offering the ability to adjust the ride height across 90 mm.

Inside, it’s standard Audi fare, which means pleasing fit and finish, broad uncluttered surfaces and loads of technology. As with other full-size Audi models, the RS-badged Q8 adopts a pair of stacked touchscreens; the upper 10.1-inch display takes care of infotainment and navigation, while the lower 8,6-inch item covers climate control and various other convenience functions. It’s lovely to look at but the touch-based system (like most) is tricky to use on the move and collects fingerprints at a rate of knots. It furthermore leaves frustratingly little space for oddments storage up front.

The sport seats are finished in Valcona leather (with a honeycomb pattern and red stitching) and offer a smart mix of support and comfort. The luggage compartment is substantial at a claimed 605 litres, while rear headroom is decent despite the dramatically sloping roofline. Legroom for rear passengers, meanwhile, is generous, with the three-seat bench boasting both slide and recline functions. A neat touch is the inclusion of frameless doors with a power soft-close function.

It may be the most expensive Audi bar the V10-powered R8 twins but the RS Q8 – which garners copious amounts of attention out on the road – is a whopping R600 000 cheaper than the Mercedes-AMG GLE63 S Coupé, while undercutting the BMW X6 M Competition by more than R500 000. For the record, our test unit was specified with around R390 000 worth of extras.

So, what do we make of the RS Q8? Well, set to maximum attack, it offers the sort of blistering performance – both in a straight line and through the twisties – that bluntly shouldn’t be possible in an SUV. Yet, dial back the drive settings and rein in your right foot, and it transforms into a luxurious cruiser. Its breadth of ability is remarkable (the air suspension means the vehicle can even venture a short way off the beaten track), though despite the best efforts of the 48-volt mild-hybrid system and cylinder deactivation function, it’s still a heavy drinker of unleaded.

There is a further fly in the ointment, though. A certain RS6 Avant is also available locally, boasting the same über-muscular powertrain but in a lighter body with a lower centre of gravity. It’s a good R300 000 less expensive, too. But, of course, the world in general and South African buyers in particular seem to have developed a dislike of the wagon body shape almost as strong as their attraction to the crossover, which should stand the RS Q8 in good stead. Regardless of your preference of body style, there’s no question this big Audi is an extraordinary piece of engineering.

Audi has struck an enviable balance with its biggest, priciest RS model yet. Blisteringly fast one moment and comfortably cruising the next, the RS Q8 is the quintessential Audi Sport product, albeit in SUV form. We’d probably still have the scintillating RS6 Avant, though.