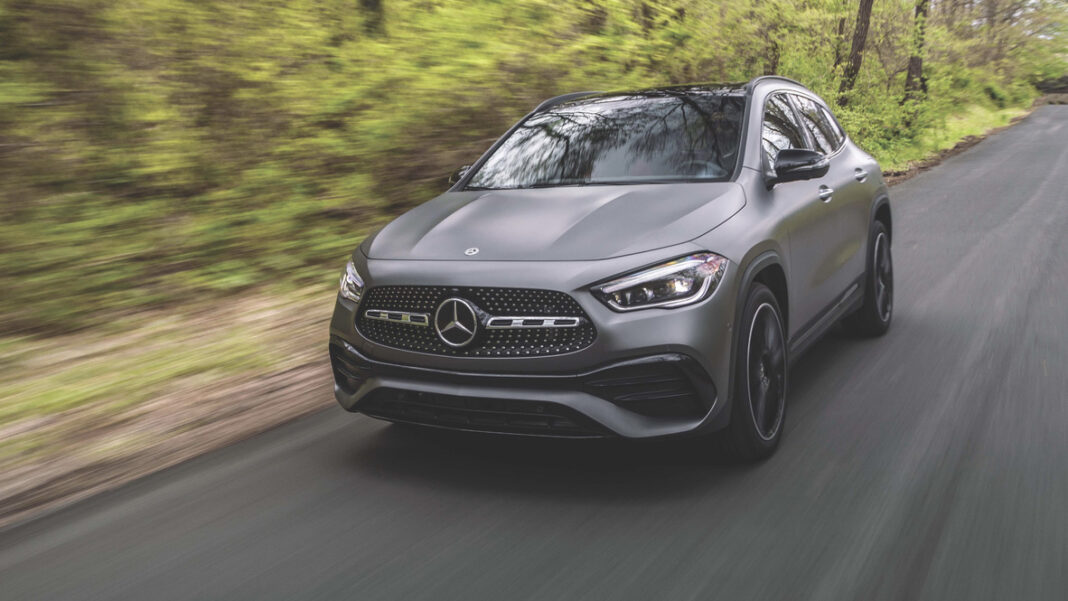 Stuttgart’s second attempt at the GLA is leaps and bounds ahead of the original. Here’s our take on the diesel derivative.

– creaks in the cabin; the pricing is quite steep, isn’t it?

Let’s be blunt: Mercedes-Benz’s original GLA wasn’t a particularly accomplished vehicle. The low-speed ride was jarring (though at least a mite better resolved than the A-Class of the time), the diesel engine was anything but refined, the rear quarters were downright cramped and the price tag was a little startling. Still, none of that deterred around a million customers worldwide from signing on the dotted line.

So, how does the new model compare? Well, the Stuttgart-based firm has thankfully righted at least three of the four aforementioned wrongs with this second-generation GLA, resulting in an altogether more impressive offering that feels eminently better suited to its role as the introductory point to the premium German company’s extensive crossover range.

Despite the fact the new GLA measures some 15 mm shorter nose to tail than its forebear, the distance between its front and rear axles has grown 30 mm. That extended wheelbase, along with a smarter overall approach to packaging (plus wider tracks), has resulted in appreciably more room in the rear. In addition, since the second-generation version stands around 100 mm taller than the original, there’s extra scalp clearance on offer, while the luggage compartment – complete with a nifty height-adjustable load floor but no spare wheel – has grown a few units to a handy 435 litres.

While the local range kicks off with the petrol-powered GLA200 (employing a turbocharged 1.3-litre, four-cylinder engine), it’s the oil-burning GLA200d that forms the subject of this test. Power comes from a version of the automaker’s increasingly familiar 2.0-litre, four-cylinder turbodiesel mill, which drives the front wheels via an eight-speed dual-clutch transmission.

Boasting maximum outputs of 110 kW and 320 Nm (the latter sustained from 1 400 to 3 200 r/min), the new engine not only outpunches the older, heavier 2.1-litre unit, but it’s also markedly more refined. In fact, this all-aluminium four-pot is a wonderfully balanced powerplant, adding both pleasing fuel frugality (we saw an indicated figure in the low-sixes) and off-the-line verve (it’s entirely possible to light up the front wheels when taking off in a hurry) to that newfound feeling of under-bonnet sophistication. The cog-swapper, too, displays none of the low-speed lurchiness that plagued the first model’s seven-speed twin-clutch item.

While we’re unable to deliver a comprehensive verdict on the GLA’s ride quality on standard suspension (with a multi-link arrangement at the rear), we can tell you the optional adaptive dampers fitted to our test vehicle lend the crossover a lovely loping gait reminiscent of that of a larger SUV. Not even optional 20-inch AMG multi-spoke alloys are able to spoil the unexpectedly supple ride.

Although the shift away from the original model’s overly firm suspension set-up is a welcome one, the upshot is a little more body lean through fast corners. That said, overall body control is excellent. The seating position, meanwhile, is noticeably higher than in the preceding model and outward visibility is greatly improved.

Inside, the GLA again borrows the bulk of its dashboard architecture from the A-Class, including those five now-signature turbine-look ventilation outlets. There’s a definitive wow factor to this cabin, should the widescreen version of the MBUX infotainment system – comprising a pair of 10.25-inch displays under a single pane of glass – be specified, that is.

It’s not without its faults, though. Scratchy, cheap-feeling plastic has been applied to the lower parts of the interior door panels (though these are admittedly not frequent touch points), while we noticed some creaks emanating from the centre console. In addition, the fact Benz has moved away from standard USB ports to USB-C outlets will likely annoy those with slightly older devices.

What to make of the styling? Well, as subjective as such a matter may be, we feel the second-generation GLA employs a far better conceived design than the original. While the first GLA came across as little more than a faintly raised A-Class hatchback, this new model looks and feels like a proper crossover, though it again features a voguish sloping roofline. Specifying the popular AMG Line package – which includes items such as a sportier front bumper, an AMG-style grille and polished aluminium roof rails, plus various bits and bobs in the cabin – simply amplifies the kerb appeal.

Thing is, like that aforementioned styling package, the majority of the new GLA’s most interesting pieces of equipment have been reserved for a typically lengthy list of optional extras. And, with this GLA200d derivative’s starting price nudging an eye-wateringly lofty R785 000, ticking even just a few tempting boxes will quickly push the price into seven figures. That’s a tonne of cash for a small crossover.

Still, Mercedes-Benz must be lauded for making significant improvements exactly where they were needed with this model. The new GLA is exceedingly more comfortable, more refined and more practical than its precursor, and drives with a far greater level of maturity. It’s all down to whether you can stomach the price.

We weren’t big fans of the original GLA but Mercedes-Benz has made amends with its second attempt. It’s an unequivocally more accomplished offering than the first – in virtually every department – and no longer feels like an entry-level model from behind the wheel. Steep pricing might put off some buyers, though.