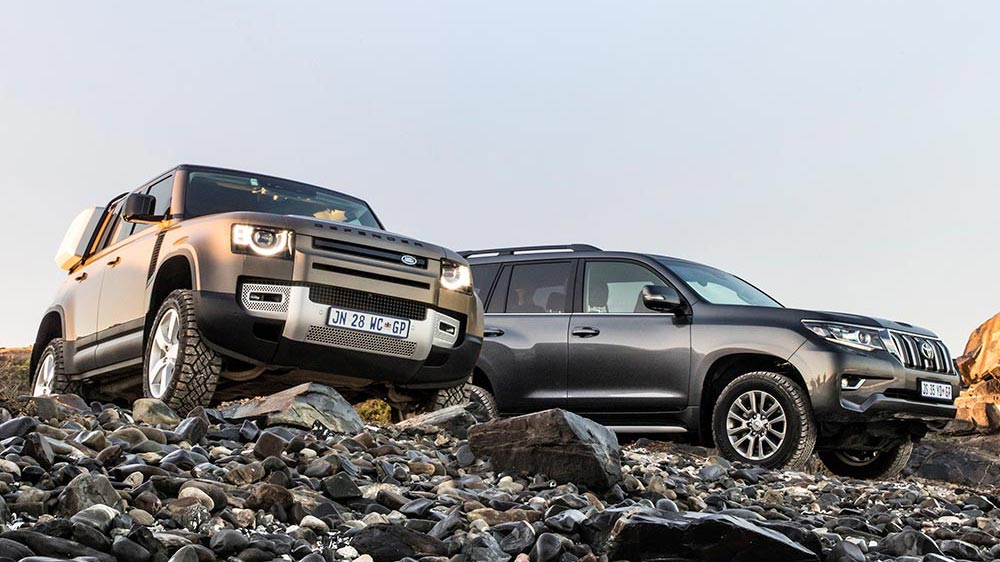 Two off-road icons square off to determine which iconic brand builds the best family off-roader for on the beaten path.

–
Service plan on a premium vehicle?; feels its age

Are there two brands more synonymous with off-roading excellence than Land Rover and Toyota? For decades, Britain and Japan have squared off and the rivalry is as fierce around braais as it is in the boardrooms and engineering centres in Solihull and Toyota City (not a misprint). Which is where APEX comes in. We’re here to settle it once and for all: which manufacturer builds the best serious off-roader for daily on-road use? 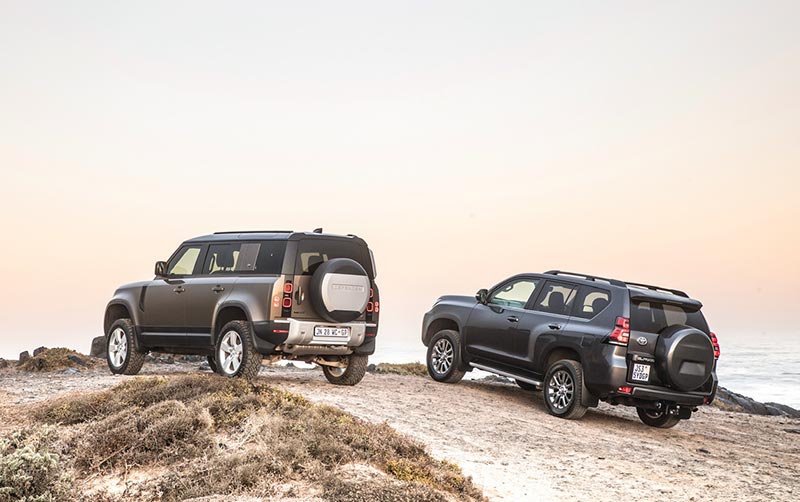 By now the new Defender needs no introduction… Launched last year after a prolonged gestation rife with speculation about the route Land Rover would take to update its iconic SUV, the revolutionary – at least compared with the rudimentary previous model – Defender has been a runaway success, with the British brand struggling to keep up with demand. What we have here is the D240 model in First Edition trim, which sits neatly in the middle of the Defender range. There are myriad other derivatives on offer, from six-cylinder petrol and diesel models, to the upcoming V8 and plug-in hybrid. Trim levels run the gamut from well-priced to Discovery 5 and Range Rover Sport territory.

This generation of the Prado has been around since 2009 – ancient in modern motoring terms – but has undergone a number of revisions since, including an extensive facelift in 2017 and the addition of a more powerful turbodiesel engine last year; the latter is shared with the updated Hilux and Fortuner. The 2020 update included enhanced infotainment tech, while 2017’s alteration added the model we’re testing here, the flagship VX-L with a sunroof and bolstered safety spec. Right, enough dawdling…

Let’s not dwell too long on subjective assessments such as styling appeal but there’s no question the Defender is the more striking, attention-grabbing SUV. While the Prado still looks surprisingly contemporary thanks to both that big facelift a few years ago and this test unit’s classy Graphite Grey metallic paint, its proportions are odd – it’s as long as the Defender, yet much narrower – and the 18- inch alloy wheels are dwarfed in the massive arches. Still, I love its pragmatic design and, besides, all the expected exterior technologies such as LED lighting all-round and keyless entry are present and correct.

The Defender, meanwhile, looks like it drove straight off a motor show stand (remember those?) and into Land Rover dealerships. Gondwana Stone is an eccentric bronze metallic which highlights the Defender’s muscular haunches and is offset nicely by this test unit’s black roof and rails. It’s certainly more imposing than the Prado, sporting as it does much wider tracks and overall width, while 20-inch wheels do a better job of filling the arches. It, too, has LED headlights but here they’re supplemented with matrix tech. Keyless entry and start are standard, too.

The visual chasm between the two continues inside. Despite the addition of a new nine-inch touchscreen infotainment system sporting Apple CarPlay, Android Auto and Toyota Connect capability, the Prado’s interior is clearly more than a generation behind. You sit upright in an electrically adjustable seat that’s comfortable but not necessarily sumptuous facing analogue instrumentation, a shallow facia, upright windscreen and bulging bonnet (a view which I love). Your front passenger is nearer than you’d think because of the narrow body. The infotainment system, despite being feature-rich, lacks the Defender’s Pivi Pro system’s crispness of display and there are buttons aplenty, some of them strewn across the facia and to the right of the steering wheel. Their placement becomes familiar with time but the scattershot approach does remind you the Toyota was launched 12 years ago. 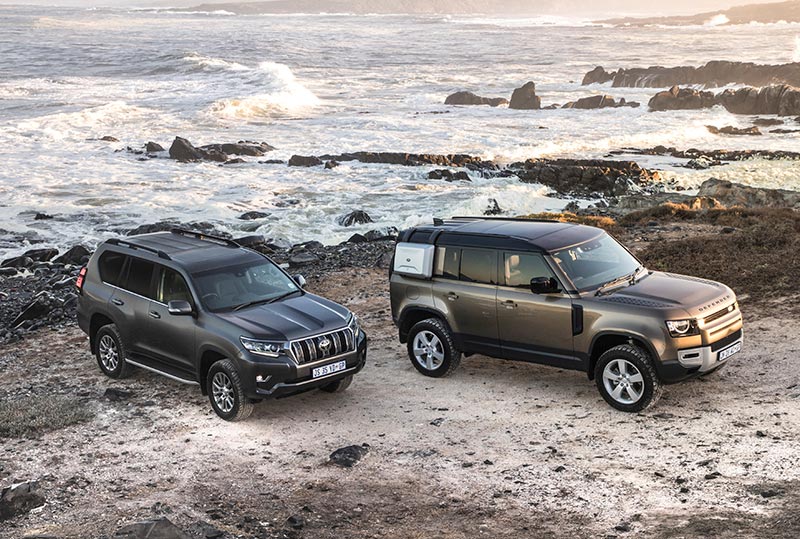 Kudos, therefore, that the Prado feels so well built. This press unit had more than 10 000 km on the clock but seemed tight as a drum. While the interior materials don’t have the contemporary appearance and feel of those in the Land Rover, they’re obviously of excellent quality and feel made to outlive the vehicle’s owner. We’ll reserve our opinion on the wood trim…

The Defender, conversely, feels very much like a product of the 2020s even as it references the old model in the facia’s horizontal lines and compact instrument cluster (and even the option of a third front seat to mimic the cubby lid in the old one so often used as a perch, although it can’t be combined with a third row of seats). The blend of utilitarian finishes and high-quality materials strikes a thoroughly modern tone, yet the cockpit doesn’t sacrifice practicality at the altar of style. The Pivi Pro infotainment system is one of Jaguar Land Rover’s best for ease of use and responsiveness, while the facia thankfully still features analogue controls for the auto air-con and drivetrain-dynamics systems. Like the Prado’s, the Defender’s driving position is upright and commanding but the seats are more enveloping and there’s huge adjustability in the driver’s chair and steering column.

Both vehicles offer oodles of room for second-row passengers and adults can just about squeeze into the third rows for short stints. Having the final pair of pews raised, which the Prado does electrically, seriously shrinks luggage capacity – down to 160 litres in the Land Rover and a petite 120 in the Toyota – but both offer immense load-carrying capability with only five seats in place.

Spec-wise, they’re evenly matched, with such items as powered and heated front seats (the Toyota adds cooling, plus heating for the second row), upgraded sound systems – 14 speakers in the Japanese vehicle; 10 in the Brit – and myriad safety items including pre-collision, blind-spot monitoring, lane-keep assist and rear cross-traffic alert standard. Three-zone climate control is an option on the Land Rover, at R10 700.

Refinement, too, is similar, although we’d caution speccing the off-road tyre option on the Defender, as the knobblies add road noise and a slight waywardness to its highway demeanour (although they do look fantastic wrapping the 20-inch alloys).

Each vehicle utilises a four-cylinder turbodiesel engine; the Land Rover’s measures 2.0 litres and the Toyota’s 3.0 litres. The former, despite its smaller displacement, musters up 27 additional kilowatts, but their torque figures are identical. Toyota installed this version of its venerable diesel in the Prado late last year and it’s made a world of difference to the vehicle’s performance and refinement. Increases of 20 kW and 100 Nm, plus an extra ratio in its torque-converter automatic transmission, mean the 2.8GD powertrain sounds less agricultural and delivers its torque in a more linear fashion.

It’s not quite as accomplished as the Land Rover’s Ingenium powerplant, however. Regularly criticised in the past for a lack of refinement, JLR’s latest line of Ingeniums are smooth, quiet and punchy. Despite weighing a considerable 2.3-plus tonnes, the Defender feels sprightly and overtaking manoeuvres are no challenge for the oil-burner … once the eight-speed automatic transmission wakes up, that is. Its languid nature suits the soothing Defender, but there are times when the ‘box simply takes too long to hook a lower ratio.

As for fuel consumption, while both manufacturers claim figures in the sevens, you’d be lucky to beat 10.0 L/ 100 km. Nevertheless, considering the performance on offer and their sheer girths, that’s no mean feat. 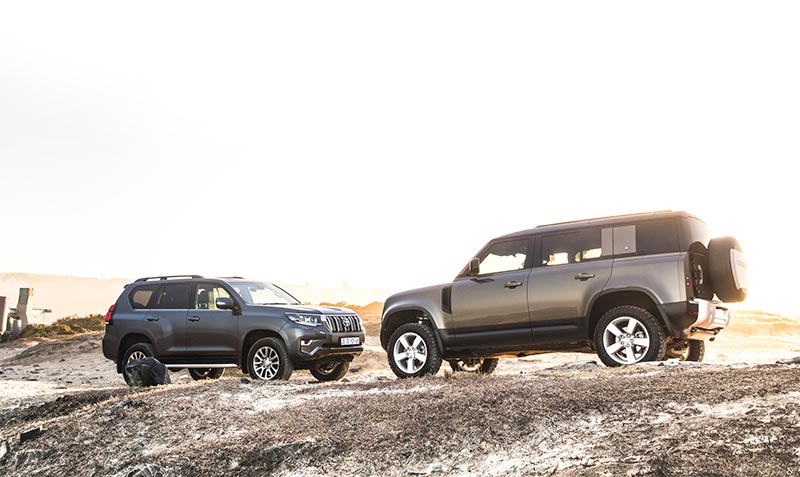 On and off the road

Here, once again, our respective competitors betray their ages. Where the Land Rover rides on an advanced D7X aluminium monocoque structure – the brand says it’s the stiffest platform it’s ever constructed – with air springs, the Toyota utilises a body-on-frame layout connected to the carmaker’s Kinetic Dynamic Suspension System with adaptive damping. The Defender is a revelation on-road, especially if you step into it from the older model. The electric steering system is perfectly geared in that way JLR always gets right – light but direct and perfectly in tune with the vehicle’s proportions to make placing it as simple as can be – and the suspension is absorbent without being floaty. In fact, a back-to-back drive with a Discovery 4 also riding on air springs showed the Defender to be the more controlled vehicle. Lean angles are big but the body moves in a predictable fashion. Only the aforementioned vagueness as the result of the off-road tyres irks slightly (I’ve driven a Defender on more road-biased rubber and the difference in behaviour is tangible).

The Prado feels different… Quite obviously an older-generation vehicle, it has slower, less-direct steering, its body moves around more and the suspension takes longer to regain composure over long-wave undulations. Yet, there’s a real sense of occasion to how the Toyota moves down the road. You’ll take longer to get to your destination if it’s on the other side of a winding road but you’ll scarcely enjoy the journey less. What’s more, its secondary ride betters the Land Rover’s, with scars barely registering in the cabin (although that could also be attributed to the chunky tyre sidewalls). 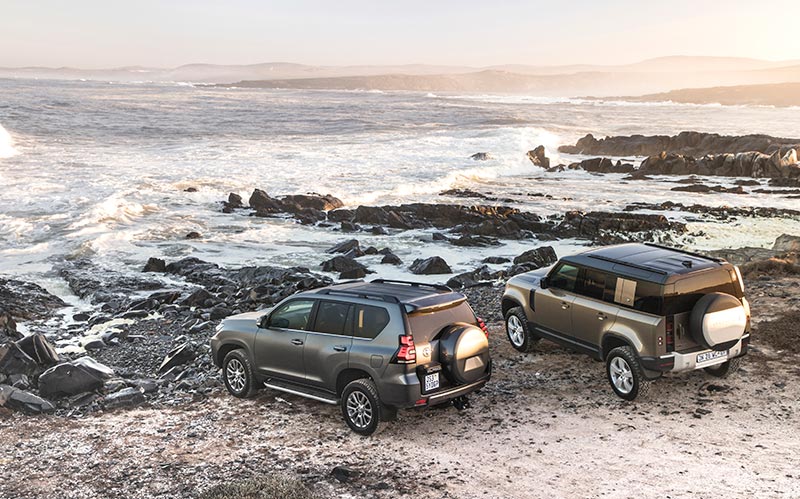 Off-road, both are near-unstoppable. I didn’t test them together on a trail on this occasion – there simply wasn’t enough time and, besides, this test focuses on their on-road prowess – but having completed the treacherous Van Zyl’s Pass in Namibia last year in a Defender and other challenging routes in various Prados over the years, I can confirm there’s very little they can’t conquer when tar turns to dust. Terrain Response 2 for the Defender and Multi-Terrain Select on the Toyota ensures the driver can pretty much sit back as they idle over boulders and through gullies.

It’s simple, and yet it isn’t… Objectively, the Land Rover is the superior vehicle. Yes, it’s quite a bit more expensive than its rival – although you’ll come closer to the Toyota’s sticker should you opt for an S-grade model (but you’ll lose some nice-to-have features) and its warranty and maintenance plan are more complete – but the Defender convincingly bests the Prado in terms of on-road dynamics, interior style and general performance. That it looks as fantastic as it does is merely a bonus. It wins here. However, there’s something enduringly appealing about Toyota’s ageing SUV. It might not be able to match the Land Rover’s incredible overall competence, but in its own idiosyncratic way, it’s a delight to drive and the perfect salve to the stresses of a chaotic world. I had both vehicles on test at the same and, more often than not, I chose to drive the Toyota instead of the Land Rover. Make of that what you will…

Too expensive? Try these alternatives.

We recently drove the new Toyota Fortuner and Land Rover Discovery Sport, both less expensive but no less appealing alternatives to their bigger siblings.

The Fortuner features the same engine-transmission combo as the Prado. The oil-burner isn’t quite as refined here as it is in the bigger vehicle but has 230 kg less to worry about and so feels quite a bit spritelier. It doesn’t ride as comfortably but it’s certainly no crashy utilitarian workhorse, either. Standard specification on the Fortuner VX is superb, too, which makes the R806 300 sticker that much more intriguing.

The Disco Sport, meanwhile, costs R1 013 662 in flagship D200 R-Dynamic HSE trim and offers a slightly detuned Ingenium engine (the power and torque figures are counterbalanced by the Disco’s lighter weight). It’s arguably even better to drive than the Defender, although it won’t go as far off-road, nor seat its third-row occupants quite as comfortably. As far as premium compact SUVs go, though, the Disco is one of the market’s best.