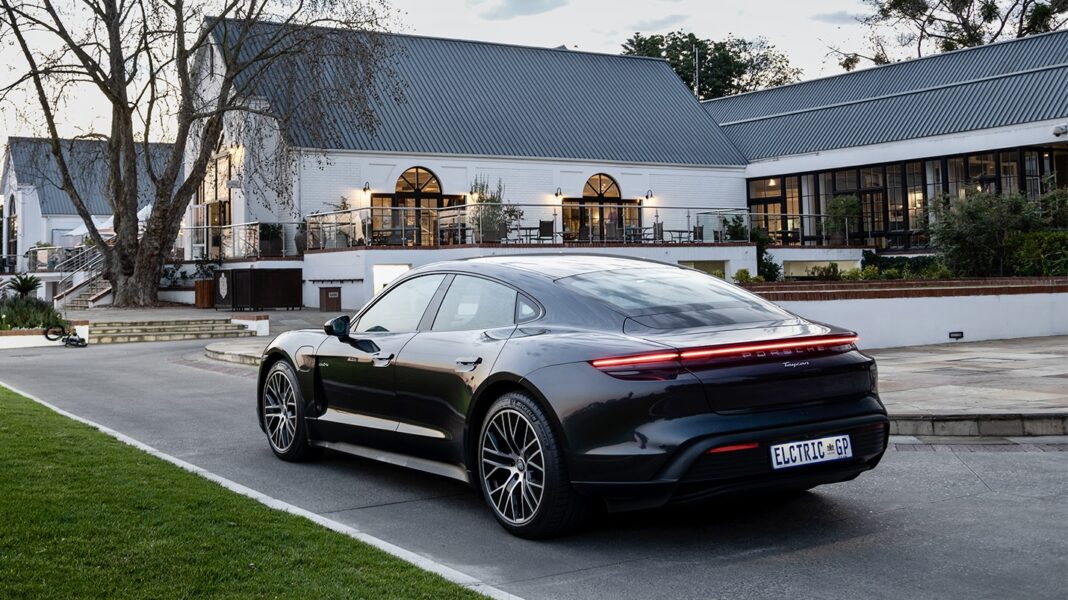 Ready or not, here they come. SA will soon welcome a raft of new fully electric cars, so we set course for the Garden Route to document the pros and cons of EV travel.

The slightest flex of a right ankle sees us surging towards the horizon with an undiluted rush of electric energy. Moments later, we’ve hit the speed limiter and yet, you feel there’d be more to come should this restraint be lifted. As the path ahead curves to the right, the front tyres struggle to cope with the top-heavy shift in mass and squeal their desperate disapproval. At the same time, it’s impossible not to notice an alarming amount of wind noise gushing into the cabin.

To be fair, the golf carts used by Fancourt Hotel – situated on the outskirts of George in the Western Cape – are likely prepped to favour comfort over dynamics. Still, this sunset shuttle back to our accommodation from the currently lone charging station situated at the far end of the estate proved the perfect palate cleanser after the truly fascinating day now fleeting.

My experience of electric vehicles (EVs) ranges from an economy run around the European countryside in a tiny Volkswagen e-Up to a longer local stint in Jaguar’s ground-breaking I-Pace. That said, I was as anxious as I was excited to set course on an 800-plus km road trip, backed up only by the promise of German engineering and, by all accounts, a neatly established network of charging stations along the way.

Additional pressure to perform was served by my wife, who had confidently booked her birthday spa treatment for mere moments after our scheduled arrival time. But is there such a thing as an estimated arrival time when heading off on such a trip, with no salvation on offer from the otherwise ever-welcoming fuel station forecourts along the way?

Setting the scene for the imminent arrival of examples from compatriot brands Audi, BMW and Mercedes-Benz, the all-electric Porsche Taycan has been available in South Africa since late 2020. While the nameplate was introduced via the flagship Turbo S derivative, sometimes less is more. By deleting the second, front-mounted electric motor fitted to the Turbo models, the new entry-level Taycan is around 90 kg lighter than its siblings but also by default exclusively rear-wheel driven. The more powerful versions receive power at all four wheels.

That said, it’s still a Porsche, so it’s still very much performance oriented. More than the additional 40 kW it adds, the fitment of an optional (R137 000) Performance Battery Plus upgrade to this test unit meant both faster charging and, just as crucially, extended range capabilities.

Collecting the fully charged vehicle from Porsche Centre Cape Town, it was this 460 km range readout that instinctively caught my eye. From experience, this figure can be a temperamental beast, known to fade rapidly should driving conditions prove less than ideal or unforeseen route delays be encountered.

Yet, with our gear easily swallowed by the 407-litre luggage compartment, to my pleasant surprise the Taycan’s distance-to-empty range didn’t suddenly dissolve, even after we exited Cape Town via the summit of Sir Lowry’s Pass. Indeed, as we learnt to trust the forecasted remaining charge percentage readout located alongside the ETA on the car’s crisp navigation system, we were able to relax somewhat and enjoy the drive that much more.

Championed by Jaguar South Africa and implemented by GridCars, there currently exists a network of about 150 charge stations dotted around the country. In fact, it’s claimed there is a station located no more than 200 km from the last on all three of the main routes within South Africa; the N1, N2 and N3.

Sailing confidently past the opportunity to top up in Caledon, had we shifted the car into its maximum range mode (which dials out air conditioning and limits the top speed to 100 km/h), we could potentially have reached George without needing to stop. Keen to experience a more authentic scenario, however, I drove as I would normally, blasting past slow-moving trucks and leaving the occasional cheeky hot hatch driver behind to reconsider his tailgating ways.

The Taycan tackled the N2 highway in a manner similar to the Audi A7 I drove on the same route a few weeks prior. That’s to say, while the Porsche is obviously silent around town, on the open road it presents similar levels of road and wind noise to those of a well-insulated modern premium sedan (okay, Sportback).

While curiosity compelled us to stop at the charging station at Buffeljagsrivier outside of Swellendam, it was worth it to witness numerous Toyota Hilux owners react to the sight of an automotive photojournalist shifting aside two massive blue traffic cones in order to gain access to the two similarly blue-painted demarcated EV parking bays.

The sound of the charge station at The Links at Fancourt tripping the building’s mains electricity supply is not one I will soon forget. While not being overly dramatic, it resulted in an uneasy night’s sleep, as I knew my remaining range meant my options were limited.
The following day, the kind folks at Jaguar Land Rover George granted me access to their in-house charging station.

Despite leaving the car plugged in for around four hours, this facility curiously reset itself midway, resulting in a charge gain of just 17 per cent. First prize here would’ve been an app-based system to monitor and detect a potential problem during the charging process.

It was a bittersweet moment finally unplugging the Taycan after it received a boost to 81 per cent capacity via the Jaguar-branded station sited behind the KFC at the George Mall, where I was obliged to spend a couple of hours of my weekend away.

A compulsory blast up the Outeniqua Pass confirmed that, despite weighing two tonnes, the Taycan is still very much a Porsche. But again I was reliant on the station at The Links for the juice required to make it back to Riversdale on the way home. The problem with this box unsolved, it was left to the impossibly efficient staff at Fancourt to plug the car into the mains of their admin building for an overnight trickle charge.

Arriving in Riversdale the following day, a red illuminated fault light on the EV charge station corresponded with news the entire town would be without power for the day due to maintenance work. Having wistfully sent an SOS to the WhatsApp helpline number displayed on the side of station, I was en route to sell my wife on the virtues of an overnight stay in this quaint town when Morné from GridCars called to brighten up my Sunday. As it turns out, the charging station is wired into the generator of the adjacent Shell garage and, with a few clicks of a mouse at the Gauteng-based customer centre, the Taycan was once again gobbling DC.

An hour later and leaving town with more than enough caffeine and range to make it home, my wife’s observation that our car’s windscreen was still dirty was a poignant one. Many mainstream manufacturers have inked a deadline for their final combustion-engined vehicles leaving the production line, but where does this leave the South African market? One where, aside from many other factors, our petrol attendants are among the friendliest and most efficient service providers in the country? It’s a tough question to answer.

Like it or not, the future of motoring – and premium motoring in particular – in South Africa is electric. While it’s not to say I wouldn’t have enjoyed my road trip as much in an equivalently priced Porsche Panamera, what my weekend away in an EV proved is that these cars are and will continue to be capable enough. Now to grow the infrastructure. 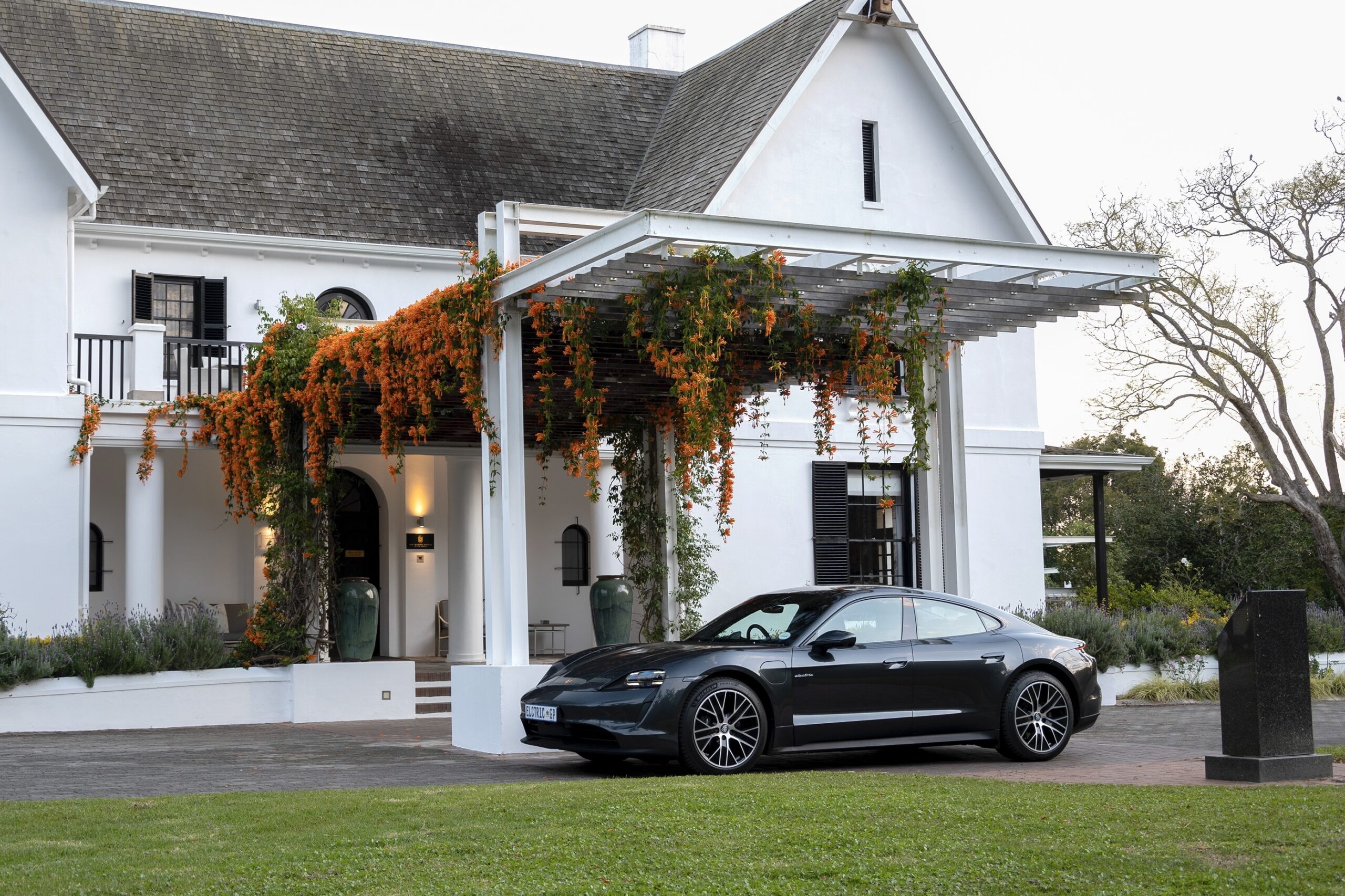 (Big thanks for Fancourt Hotel for providing us with lovely accommodation … and useful electricity. Visit their website at www.fancourt.co.za.)