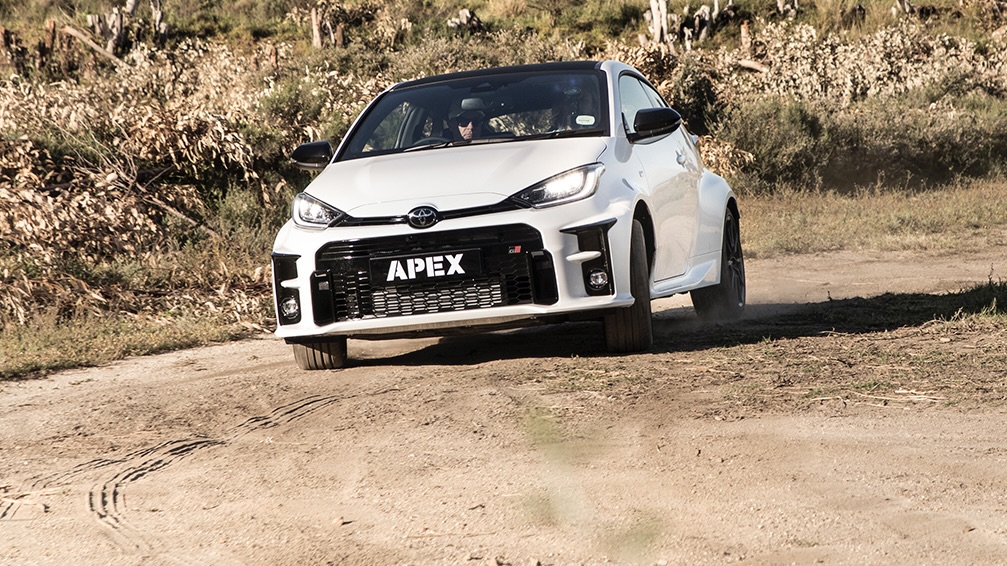 It’s a cool six degrees Celsius as I arrive at Ruitersvlei Wine Estate in Paarl, Western Cape. The cold feels razor-sharp against my skin as I open the driver’s door but quickly disappears as I shift my focus to the menacing little hot hatch parked alongside me. It’s the Toyota GR Yaris, one of the most highly anticipated hot hatches of recent years.

I’m immediately reminded of the time (just a few weeks prior) I spent with this exciting hatchback at a duo of racecourses on the local launch. At that same event, I also rode shotgun with South African racing legend Giniel de Villiers as he pushed the all-paw hatch to its limits. It was an absolute hoot. Now, a similar opportunity has arrived, although this time it’s on a stretch of gravel, a place where the rally-inspired GR Yaris should feel very much at home.

I climb into the flagship GR Yaris, put on my seatbelt and turn to Giniel. Since he’s already driven this vehicle on various surfaces, I ask him what he thinks of it just before we set off.
“It’s…” Giniel pauses. With his eyes firmly set on the stretch of dirt road ahead, he releases the clutch and depresses the throttle in one effortless movement. The Michelin rubber bites into the gravel and the GR Yaris sets off in spectacular fashion. The endearing note of the world’s most powerful series-production turbocharged three-cylinder engine springs from the twin exhaust outlets. A cloud of dust trails behind us.

With a tug on the manual handbrake lever and a flick of the multifunction steering wheel, he directs the vehicle into a seamless drift. Much like in a television advert where experienced stunt performers ply their trade, at this particular part of the article it seems appropriate to advise “not trying this at home” and pointing out the “stunts seen here have been carried out by professionals”.

“When driven on a dirt road, the GR Yaris is great”

“It is such a lekker plaything,” Giniel says, finally completing his initial sentence as we come to an abrupt halt. “The thing about this car is, it’s so well balanced. I can do this [drift] with one hand.”

For Giniel, the handling and finely honed chassis are the standout characteristics of the GR Yaris. There is, however, one thing he would have appreciated. “I would have liked it to have a little more power,” admits the 49-year-old. “Just around 50 kW more. On the tarmac, you can’t break traction. There is just so much grip. If you want to put it into a slide, you have to use the handbrake.”

Remembering my time spent in the passenger seat while Giniel was at the wheel during a jaunt round a Formula K racetrack, I certainly understand his reasoning. On this tight and twisty racetrack, which is located on the outskirts of Johannesburg, it was astounding to experience just how composed the GR Yaris was around corners.

“When driven on a dirt road, the GR Yaris is great,” continued Giniel. “If you want proper fun, this is where you should drive it. Here, the power is more than sufficient to break traction. But you have to drive it in sport mode.” Set to the latter, the GR-Four set-up sends 70 per cent of torque to the rear axle, with the remaining 30 per cent channelled to the front. Dialled to the normal setting, torque is distributed in a 60:40 split, with track mode adjusting that to a pleasingly balanced 50:50.

“When producing a road car, manufacturers obviously have to favour understeer for safety reasons. But switch to sport mode and the GR Yaris is awesome. I know I said I would’ve wanted the engine to produce an additional 50 kW or so, but the 1.6-litre turbocharged motor is still unbelievably responsive,” he added, his hand resting on the six-speed manual gearbox’s leather-trimmed lever.

“It moves,” exclaims Giniel, depressing the clutch and again selecting first gear before billing the GR Yaris as the most exciting road car ever produced by Toyota. Speaking of thrilling road cars built by the Japanese manufacturer, I can’t help but think of the Yaris GRMN. I ask Giniel how the GR-badged homologation hot hatch compares to its front-driven forebear.

“The Yaris GRMN is an impressive car. It had an ample amount of go. But with its all-wheel-drive system, the GR Yaris is just that little bit better. The GR Yaris is the better balanced of the two and the manner in which it comes to a halt is impressive [thanks to four-piston, grooved front brake discs measuring 356 mm in diameter],” explained the Barrydale-born rally star. “The GR Yaris feels just right. If I had to choose between the two, I’d definitely take the GR Yaris.”

Many thanks to Giniel de Villiers for taking time out of his busy schedule to join us; to Richard Carew from Cape Dirt for allowing us access to one of the Western Cape’s most picturesque dirt tracks, located on the Ruitersvlei Wine Estate; and to the directors of Trail Freedom Commission, Graham Hedgcock and James Hatting, for coming along with their two-wheelers. For more info or to book this venue, contact admin@capedirt.co.za.