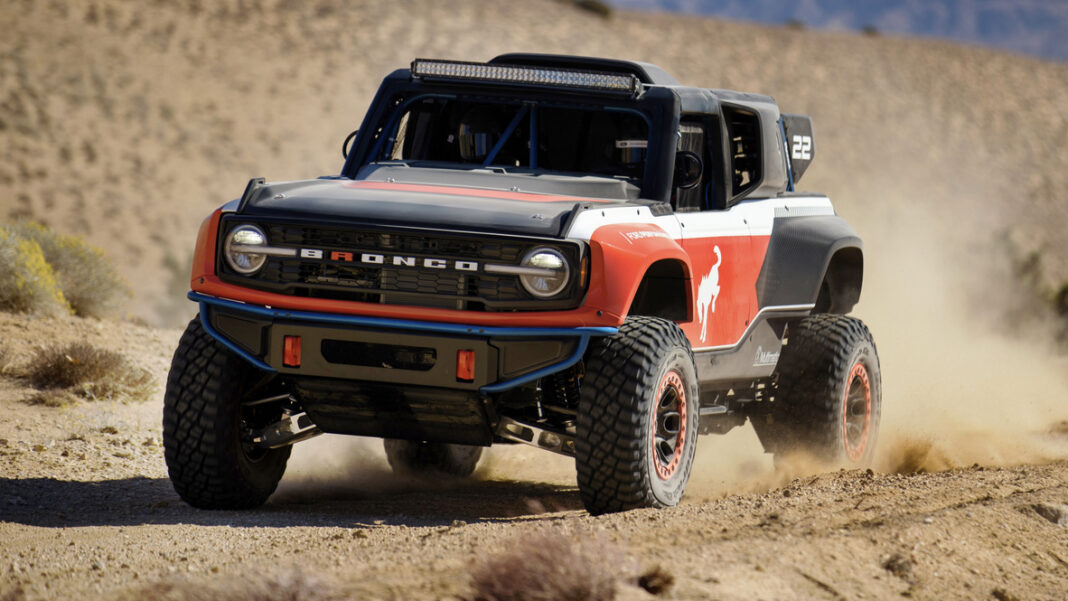 Ford has whipped the covers off the Bronco DR, a first-of-its-kind, limited-production Baja desert race SUV intended for “off-road use only”.

According to the Blue Oval brand, the desert racer builds on the “already impressive” capability of the standard version.The “DR”-badged dervative is endowed with a third-generarion Ford Coyote 5.0-litre V8 engine, Multimatic positional selective (DSSV) dampers and Multimatic roll cage. According to the automaker, the engine aims to generate “more than” 298 kW.

“This is a ground-up build, which is a bit unique in itself,” said Mark Rushbrook, Ford Performance Motorsports global director. “At the heart of what we did here was capture the enthusiasm surrounding [the] Bronco, and then build on it by creating a desert racer that is competition-ready coming out of the factory – something Ford has never done before.”

“It’s not just a Bronco with some stripes on it”

Rushbrook added: “[The] Bronco DR is our ultimate turnkey off-road racing SUV, engineered to put enthusiasts behind the wheel of a desert racing force. It exists to give hardcore off-road enthusiasts a ‘Built Wild’ 4×4 to compete in desert racing events, including the unforgiving Baja 1000. It started with the Bronco four-door – the platform and chassis are production true – and then we modified and optimised every aspect and built the vehicle hardcore off-road enthusiasts want.”

“It’s not just a Bronco with some stripes on it,” said Paul Wraith, Bronco chief designer. “We were inspired by extreme rally cars, and then went all in.”

The Bronco DR prototype is scheduled to make its race debut next year. The first 50 units of the production version will become available later in 2022, with pricing starting from in the “mid”-$200 000 range (R3 million).