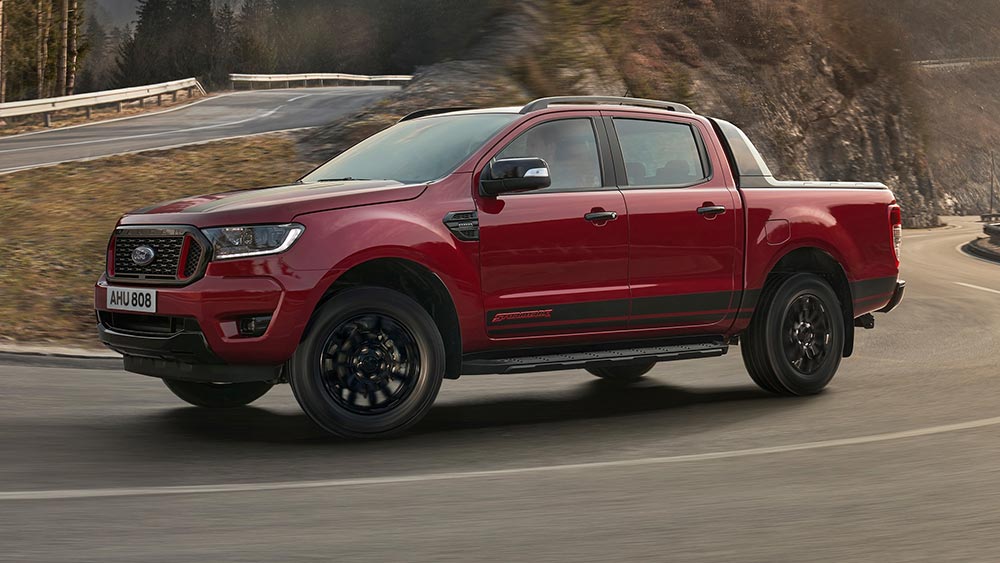 The Ford Ranger Stormtrak is heading to South African shores, with the local arm of the Blue Oval brand announcing the manufacturer’s latest limited-edition double-cab bakkie will arrive in South Africa later in the third quarter of this year.

The Ranger Stormtrak is scheduled to reach SA in the third quarter of 2021.

Said Doreen Mashinini, general manager for marketing at Ford South Africa, “The Ranger Stormtrak follows the same recipe as the limited-edition Thunder, by elevating the style, sophistication and exclusivity of our most luxuriously appointed model in the Ranger line-up.”

Based on the Ford Ranger Wildtrak, the Ranger Stormtrak, Ford says, features several attention-grabbing exterior design elements. On the outside, the Ranger Stormtrak is distinguished by a black mesh front grille, complete with red inserts; a black insert in the lower section of the front bumper; black decals for the bonnet and doors; black roof rails; and gloss black 18-inch alloy wheels. Three-dimensional “Stormtrak” logos, located on the lower sections of the front doors and tailgate, signifies this Ranger’s special status. For the Ranger Stormtrak, Ford has introduced Lucid Red, a new exterior paint option, to the colour palette. Sea Grey, Frozen White and Blue Lightning body hues are also on offer.

Adding practicality to this limited-edition Ranger, the Ranger Stormtrak is equipped with Ford’s new electrically operated roller shutter for the load compartment as standard. Adding further versatility to the package, the Ranger Stormtrak’s load bed gains an adjustable divider kit, plus a 12 V power socket.

Inside, the Ranger Stormtrak is lathered in leather trim, highlighted by red contrast stitching. “Stormtrak” logos, also in red, are found on the front seat backrests. Standard interior fitment includes, among others, Ford’s Sync3 infotainment system, complete with Apple CarPlay and Android Auto and satellite navigation, plus FordPass functionality, which allows owners to remotely access vehicle features from their smartphone. In addition, the list of standard specification includes an array of driver-assistance systems, such as adaptive cruise control, autonomous emergency braking and lane-keeping assist.