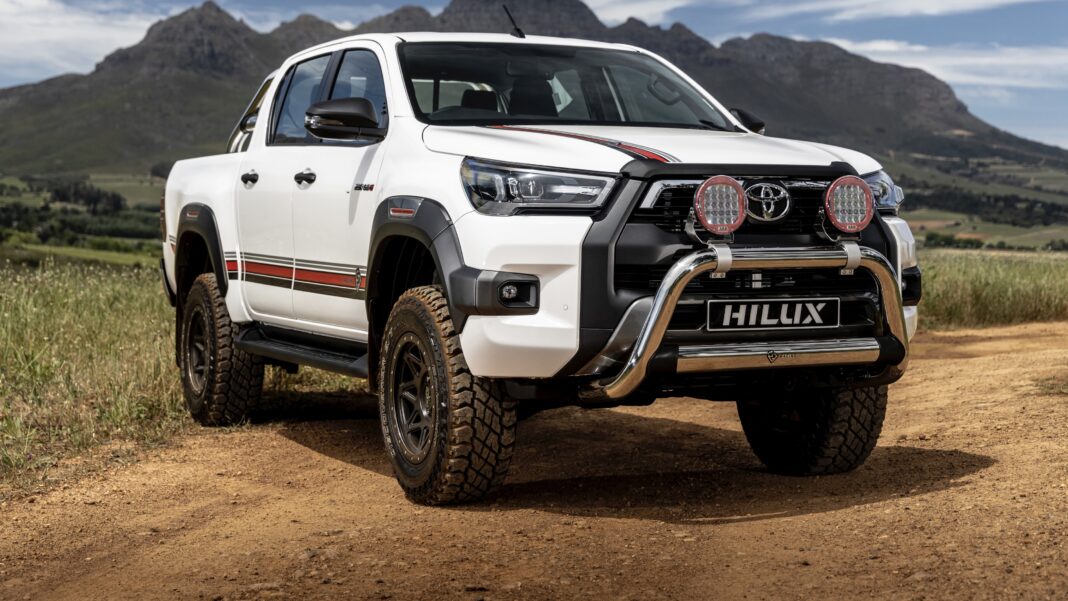 South African racing legend Giniel de Villiers and 4×4 Mega World, the “leading” manufacturer and distributed of 4×4 and camping accessories in SA, have introduced a range of customisation packages for the Toyota Hilux.

Three packages are on offer, with the first being a decal-only kit. This package is priced at “approximately” R7 600. The second option includes the exterior decals but upgrades to a stainless steel nudge bar and roll bar, ARB intensity lights and Takla seat covers. The latter items are embroidered with “GDV Racing” logos.

The top-tier package, however, “is where the components really shine”, said Kurt Brunner, head of business development at 4×4 Mega World. In addition to the abovementioned fitment, the third option on offer features 17-inch Dirty Life alloy wheels, shod in 265/70 S/T Cooper Max rubber, and an adjustable Old Man Emu BP51 suspension system. The latter set-up offers an increase in ground clearance of 50 mm and, according to the company, “significantly” improves the double-cab bakkie’s ride quality. The dampers, meanwhile, are “ideally” suited for off-road driving conditions.

“The GDV Racing kits can be fitted to either new double-cab bakkies or to cars that have been on the road for some time,” said Brunner. “We are treating this as a limited edition, however, so prospective buyers should make contact with us sooner rather than later.”

“The idea with the GDV Racing Toyota Hilux is to offer enthusiasts the opportunity to live their passion,” said De Villiers. “To my eyes, the bakkie is clearly non-standard, but it doesn’t feature any custom bodywork. This gives the car a stylish yet rugged appearance, and together with the changes under the skin, will set this vehicle apart from the regular Toyota Hilux.”

In addition to these packages, customers will also receive a GDV Racing cap, signed by De Villiers, and a pair of GDV Racing-branded Oakley sunglasses. The kits are available through selected branches of 4×4 Mega World, and prospective buyers can make direct contact with any of the 19 branches in southern Africa.