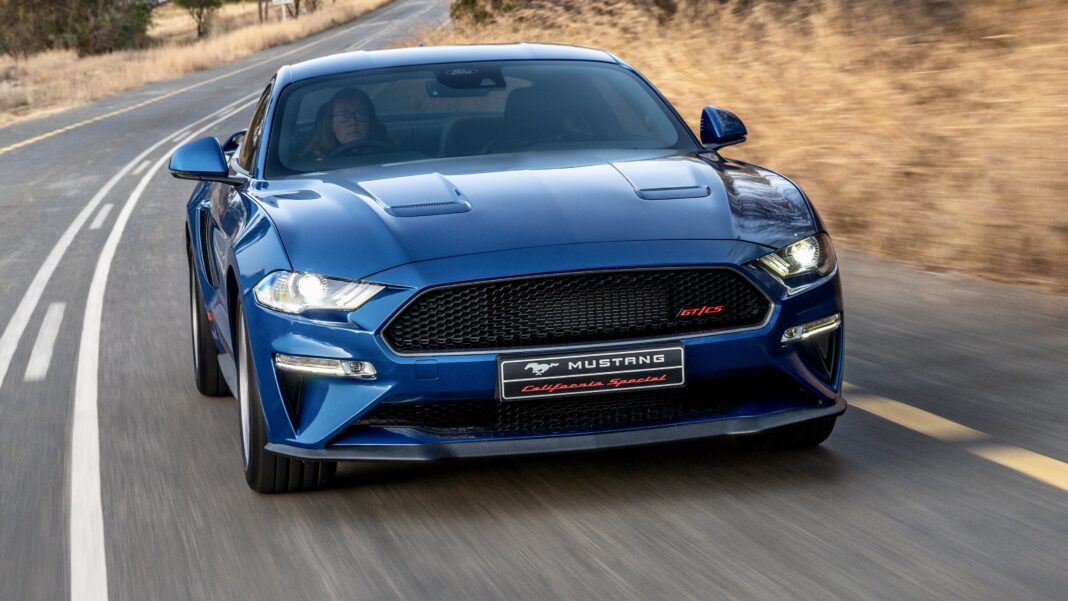 We fire up the V8 of the California Special, the latest limited-edition Ford Mustang in South Africa…

When Ford launched the first Mustang in 1964, the firm’s pony car soon achieved cult status. The Mustang is arguably one of the most recognisable models in the company’s stable. Look past the head-turning looks and the pure American muscle-car force, till this day, it’s a smile-inducing sports car; it’s performance-driven, delivering every step of the way. 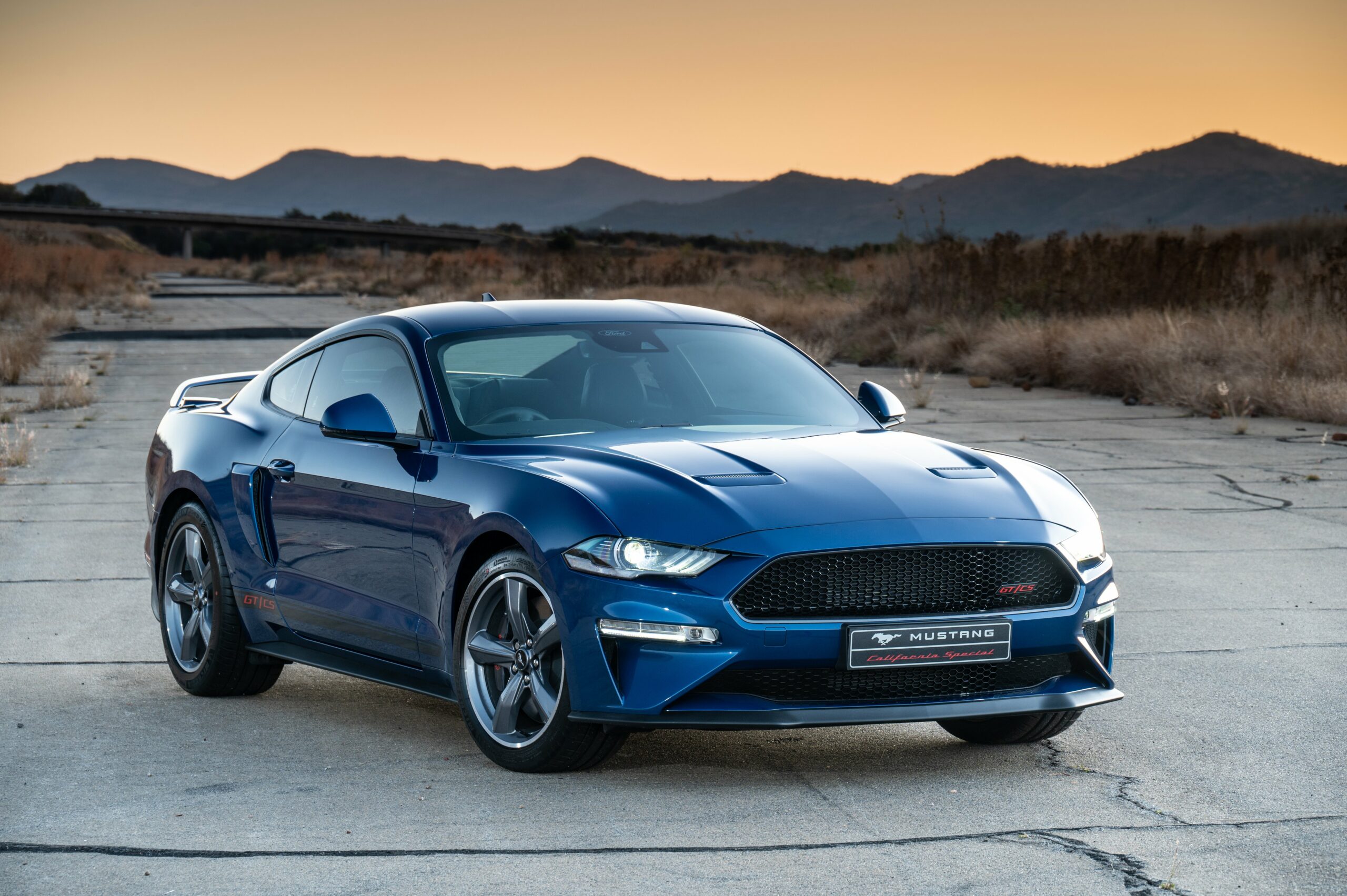 The California Special is no different. It pays homage to the original model from 1968. If you are Mustang mad, you will be as keen as mustard to get behind the wheel of one of these. Not only does the California Special look pretty darn special. It’s also exclusive… Only 100 units have been allocated to South Africa! If we can go by the past successes of other limited-edition Mustangs like the Mach 1 and the Bullitt, this will undoubtedly be another winner for the Blue Oval brand.

The biggest draw on the California Special has to be the attention to detail. We knew the design would be eye-catching, so no surprise there. Yet Ford still managed to pull off some tricks. The first, and a personal favourite, is the honeycomb grille. It has an old-school feel to it. A “GT/CS” badge, finished in Race Red, adorns the latter item. 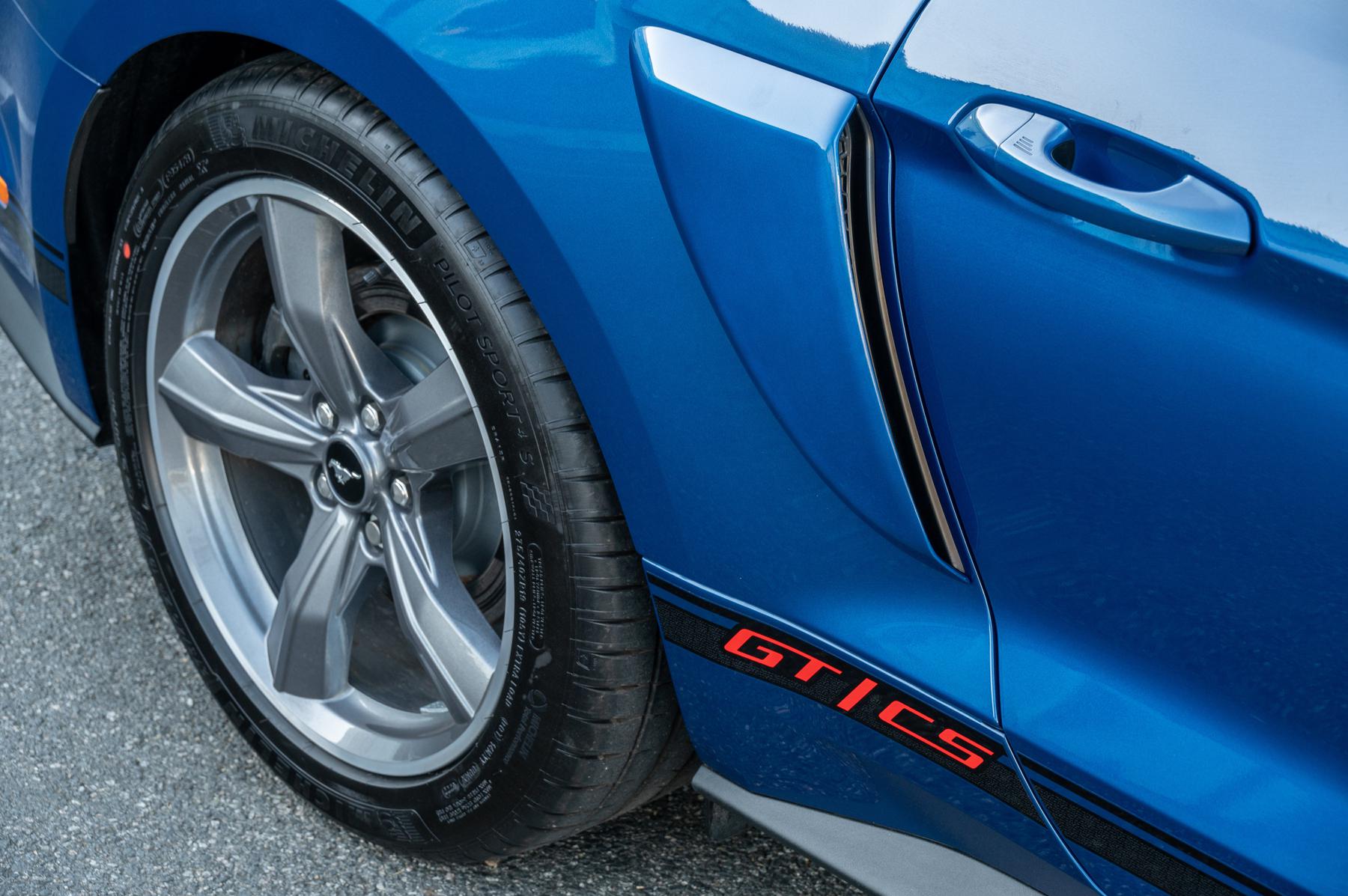 Another clever detail comes in the form of the black racing stripes running along the side of the car. If you pay proper attention, you will be able to see a unique little “California Special” script hidden in the stripes. This ‘Stang rides on 19-inch wheels in a Carbonised Grey finish. The wheels on the CS complement and tie in with the car’s overall design.

“It could arguably be the ultimate road-trip coupé”

Moving the party inside… Here you are greeted with leather seats and suede-like touches (it’s fashioned from recycled polyester), lending the cabin a luxe feel. Red contrast stitching is also present, adding to its racy persona. The gear lever screams sports car. The driving mode gets selected with a little toggle switch behind the gears. The infotainment system incorporates Ford’s user-friendly SYNC3 communication and entertainment software. The set-up is compatible with Apple CarPlay and Android Auto. 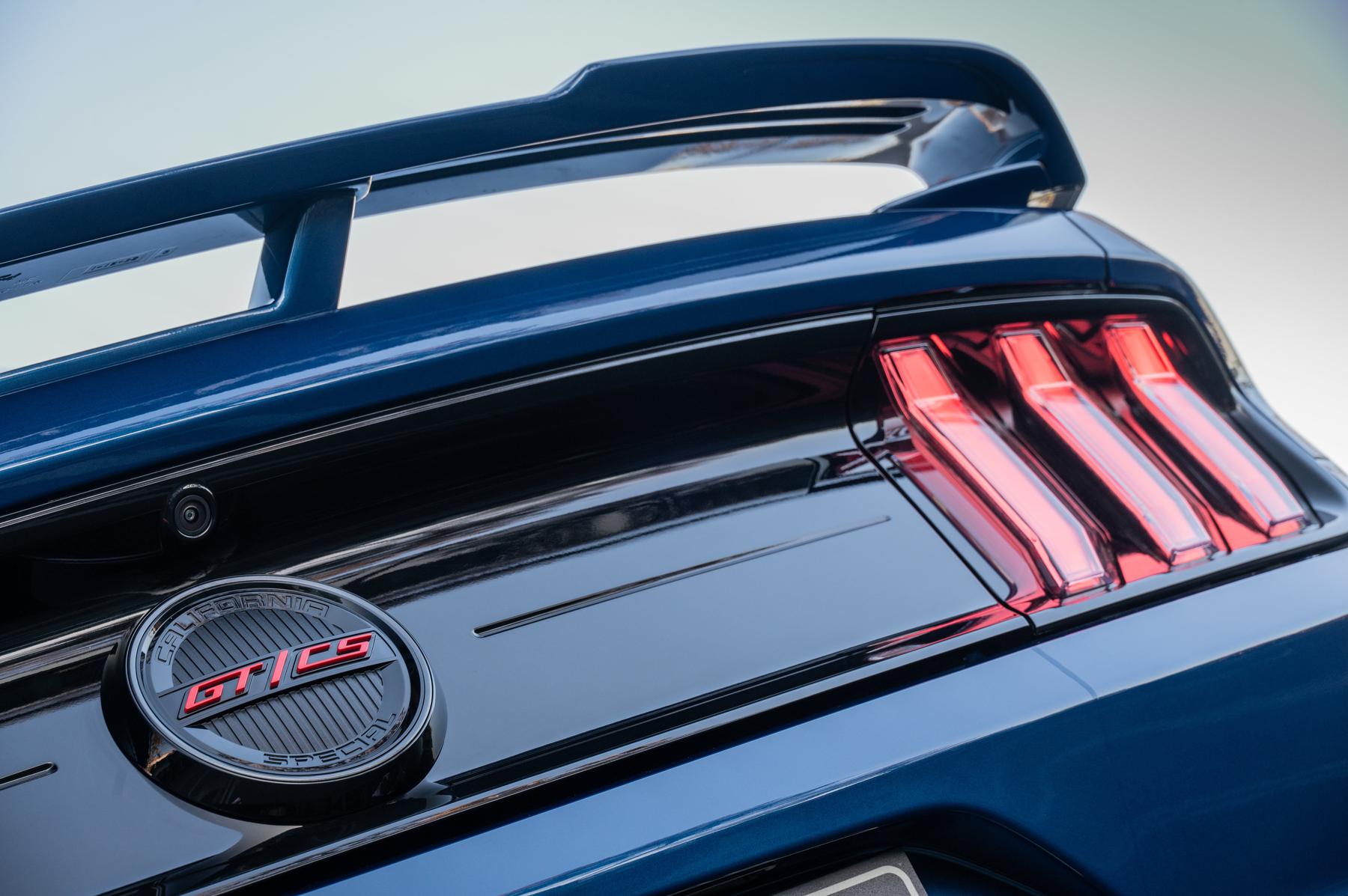 Sited behind the wheel, the V8 engine running and playing its burbling soundtrack through the active exhaust system, it’s nearly impossible to cruise at 50 km/h without a bit of a jerky ride. It just wants to break out of the starting blocks and deliver that perfect (claimed) 0-100 km/h time of 4.5 seconds.

The CS is on the thirsty side, but can you blame it? It has to feed a 5.0-litre heart, devoid of any breathing apparatus. The naturally aspirated petrol unit produces 330 kW and 529 Nm of torque. Then again, we were making liberal use of the throttle. We took the scenic and sinuous Clarens Drive from Gordon’s Bay to Arabella, averaging 13-odd L/100 km. 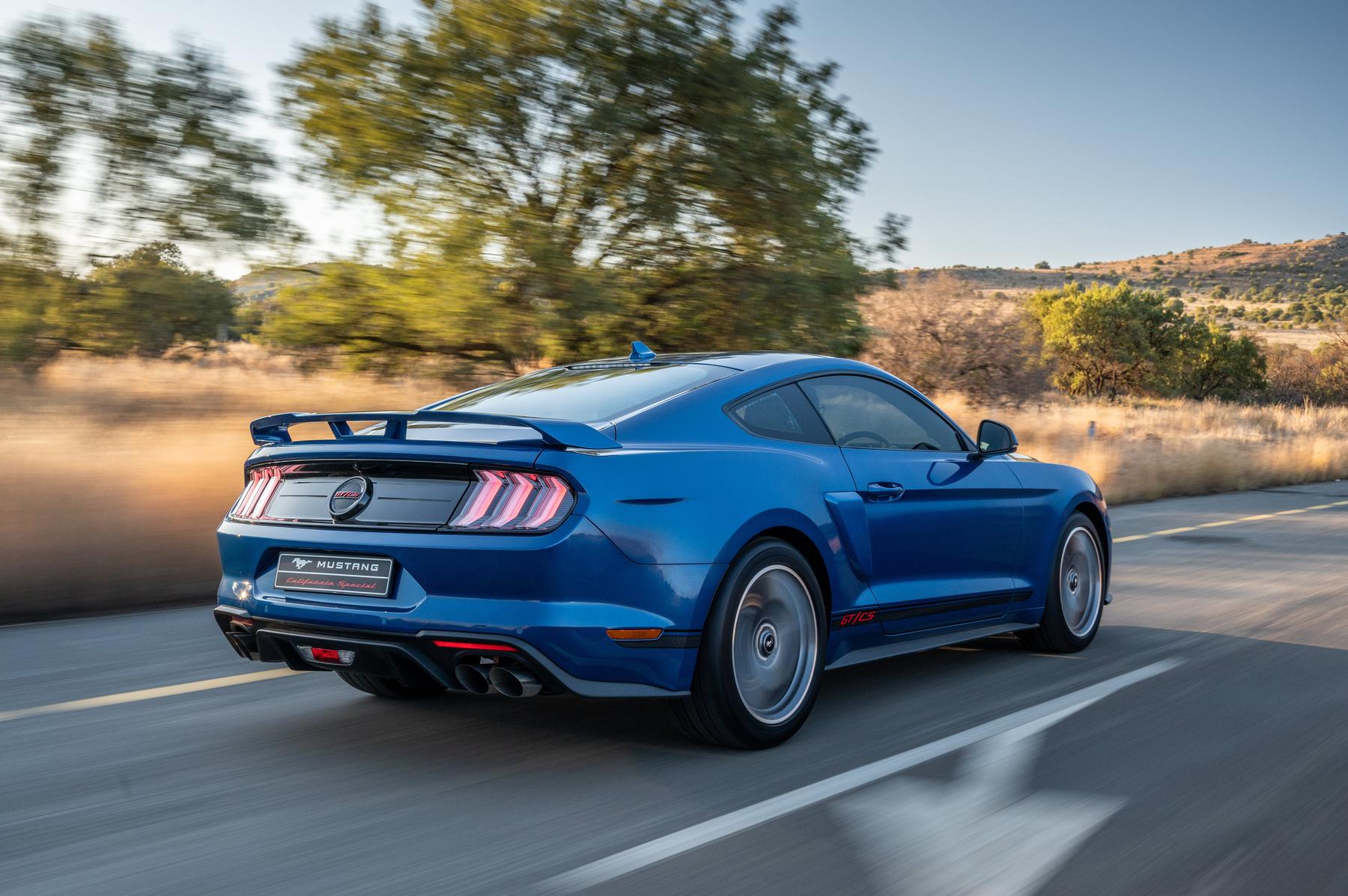 However, if you’re willing to look past its thirst, the California Special could arguably be the ultimate road-trip coupé. The seats were super comfy. The driving positioning felt bang on. The handling felt solid, and the car sat firmly on the road.

The Mustang California Special is priced at R1 154 900. But whoever said that money couldn’t buy happiness never owned a Mustang. It has a genuine fun factor.