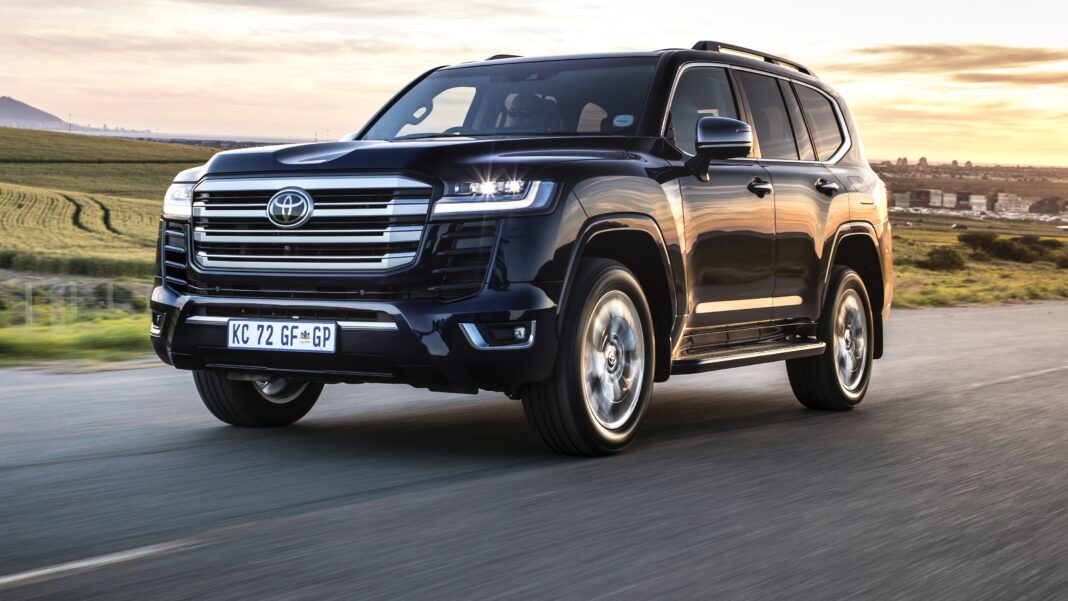 It’s fascinating to observe the approach automotive brands take when replacing the most iconic models in their line-ups. Some make a point of breaking from tradition and targeting an entirely new type of buyer (think Land Rover and its unibody Defender). Others stick resolutely to the script, faithfully serving a traditional segment of the market even if logic might suggest that sector is shrinking.

Toyota and its flagship Land Cruiser – a storied nameplate that traces its roots right back to the BJ Series of 1951 – fall firmly in the latter camp. Thing is, it seems the market for this particular all-terrain product is anything but withering. In fact, the waiting period for a new Land Cruiser 300 reportedly stretches not into weeks or months but years, with crafty speculators already listing early units online at terrifyingly inflated prices. 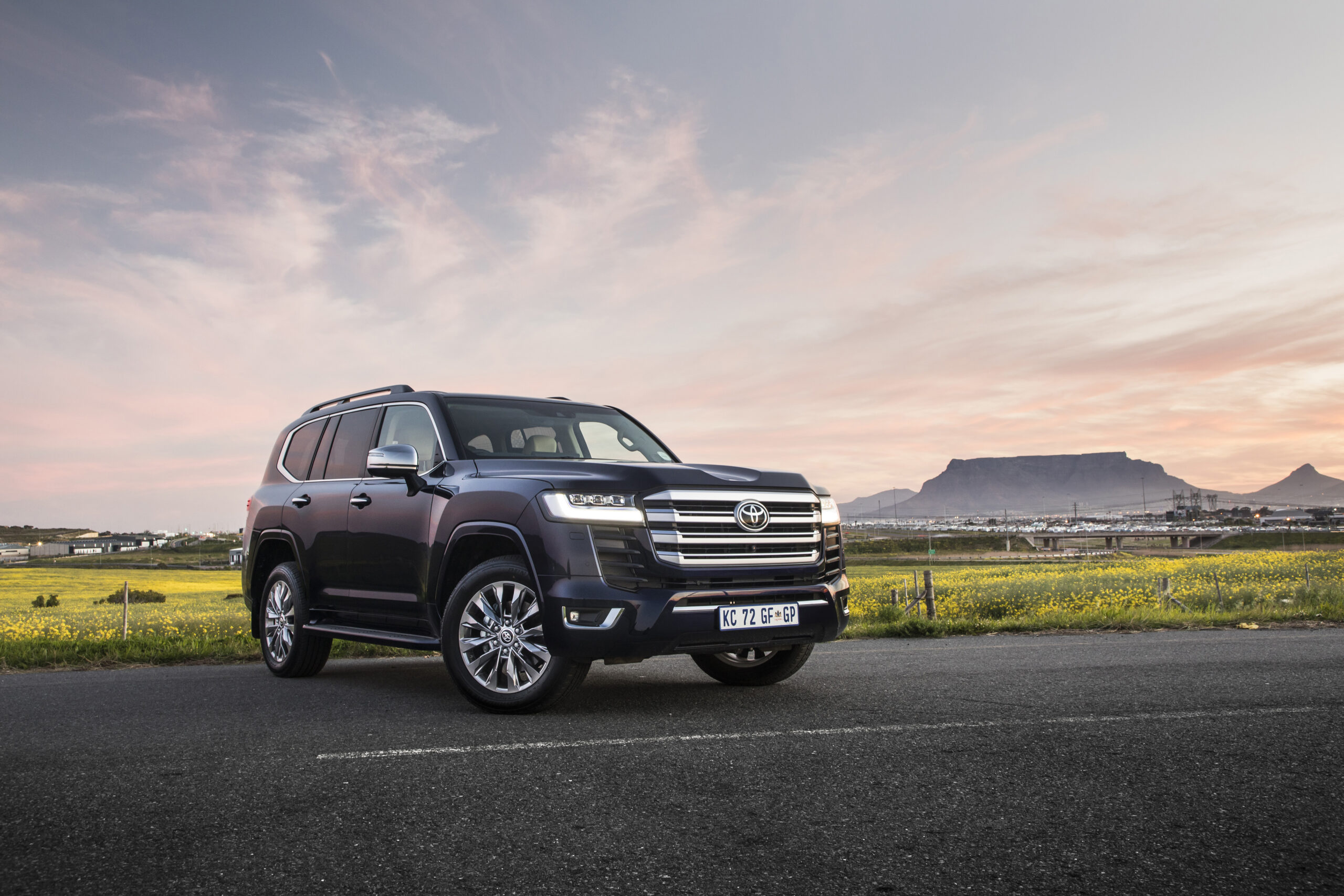 Seemingly incessant COVID 19-related production interruptions at the Yoshiwara plant along with industry-wide parts shortages are certainly playing a role in the vast disparity between supply and demand (Toyota SA Motors describes the current supply situation as downright “dire”), but there’s no doubt the 300 has captured the attention of the public. At least some of that’s down to its styling.

Although the upright grille, angular headlights and that distinctive channel running down the centre of the expansive bonnet are obvious design highlights, it’s worth noting the new model retains the general proportions (and indeed dimensions) of the 200 Series that debuted way back in 2007. The rear, meanwhile, is far more generic in execution than the front. 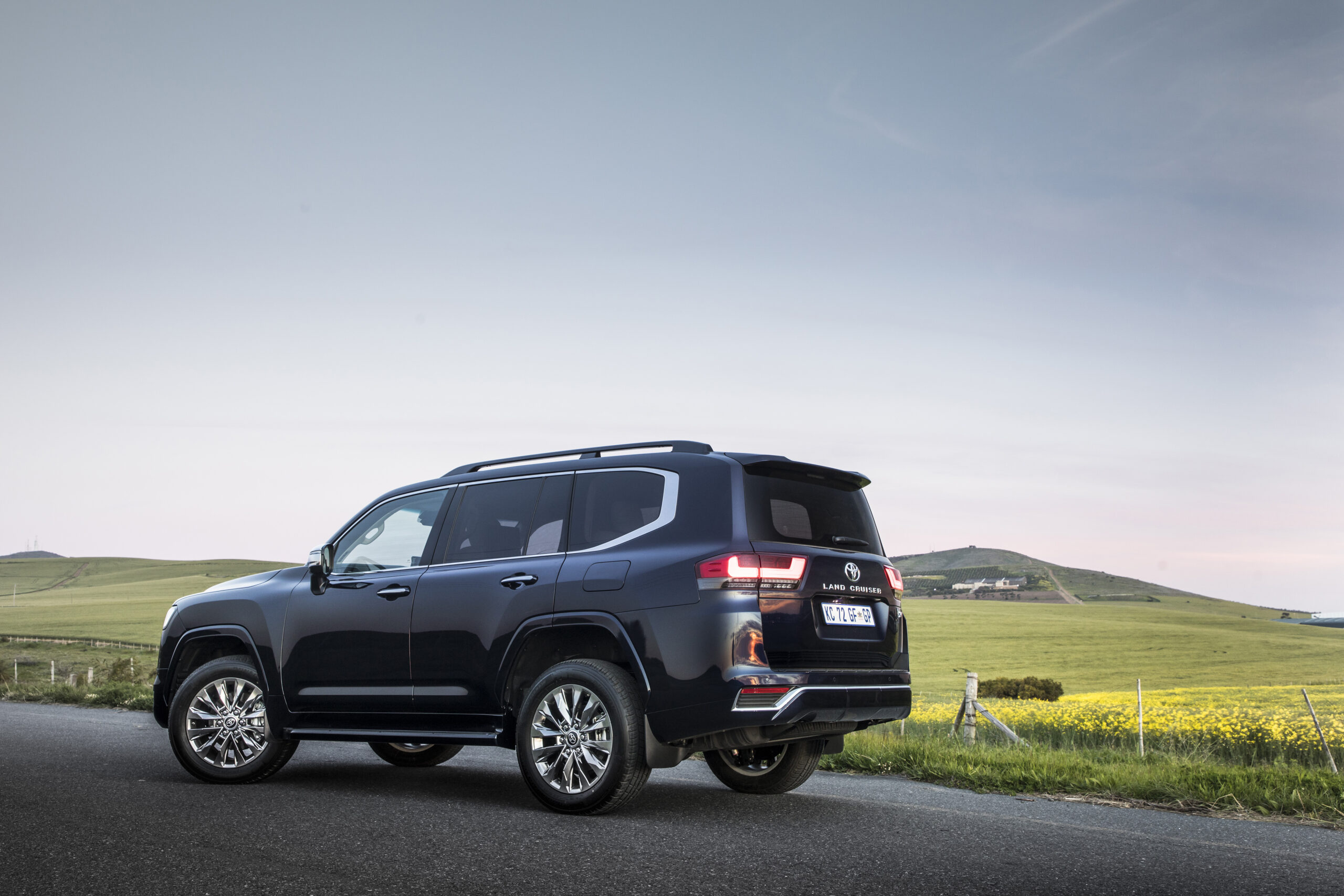 Nevertheless, it’s the oily bits buried beneath that freshly formed body that are most interesting. The seven-seater 300 rides on the Japanese firm’s new TNGA-F platform, which – much to the delight of off-road enthusiasts – is ladder-frame in construction. These latest underpinnings bring a significant reduction in weight, a lower centre of gravity (further aided by the use of aluminium for body panels such as the roof) and an increase in overall rigidity.

The bolshiest of said Land Cruiser devotees likely won’t be quite as charmed to see the trusty 195 kW/650 Nm 4.5-litre turbodiesel V8 finally put out to pasture. They needn’t fear, however, since the new six-cylinder powertrain line-up offers both more under-bonnet verve and more choice. Oil-burning duties are taken care of by a silky smooth 225 kW 3.3-litre turbodiesel V6 unit, which serves up its mighty 700 Nm between 1 600 and 2 600 r/min.

Not only is this punchier twin-turbo powerplant (codenamed F33A-FTV) considerably lighter than the revered eight-cylinder it replaces, it’s noticeably more refined and efficient (Toyota claims a combined fuel figure of 8.9 L/100 km). Since the 80-litre fuel tank is supplemented by a 30-litre secondary unit as standard, the diesel-powered Land Cruiser 300 boasts a theoretical range well in excess of 1 200 km, making it ideal for heading out to those hauntingly silent landscapes scattered north of our border. 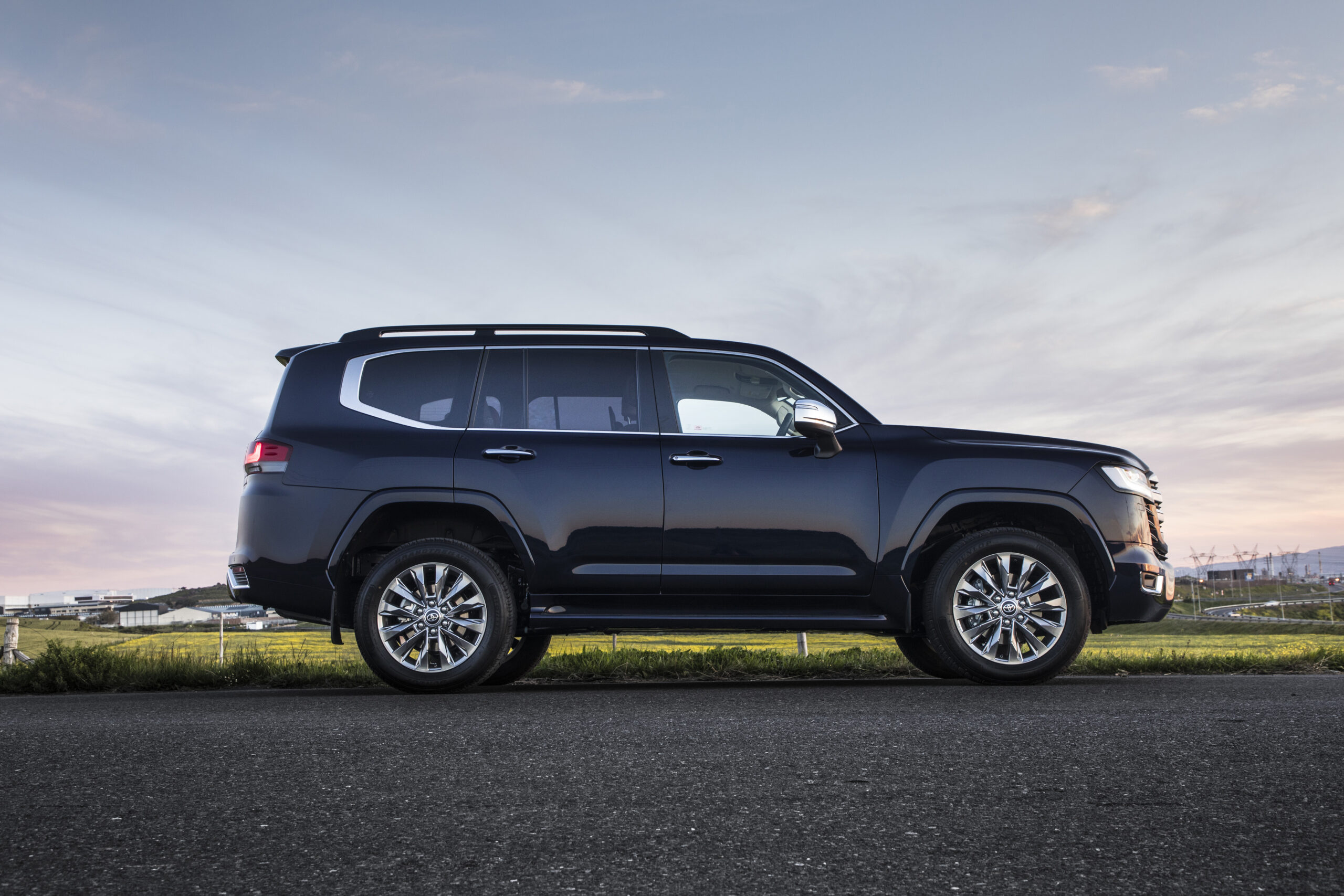 Despite the local flagship Land Cruiser portfolio not having included a petrol engine since the tail end of 2015, Toyota has seen fit to revive this flavour of fuel for the 300 Series, with the five-strong line-up including two derivatives powered by a twin-turbo 3.5-litre V6. Familiar from the Lexus LS luxury sedan, this responsive yet sophisticated six-pot churns out a brawny 305 kW and 650 Nm, the latter on tap from 2 000 to 3 600 r/min (so, delivering a meatier spread of peak twisting force than the diesel).

Though it’s markedly thirstier than the diesel alternative and thus settles for a less impressive cruising range, the V35A-FTS motor is undeniably the more alert of the two, offering pleasingly linear power deliver and feeling particularly well suited to brisk overtaking manoeuvres. Both engines send drive through Toyota’s latest 10-speed automatic transmission, which shuffles between its numerous ratios almost imperceptibly, along with permanent all-wheel drive and the requisite low-range transfer case.

While the Japanese company has resisted the temptation to fit air suspension (such frippery is generally the preserve of luxury German SUVs that seldom venture into remote areas, after all), the circa-2 600 kg Land Cruiser 300 features an adaptive variable set-up on all but the base model, riding with a great deal of pliancy on both the 20-inch tyres of urban-style ZX variants and the higher-profile 18-inch items of the new GR Sport derivatives. 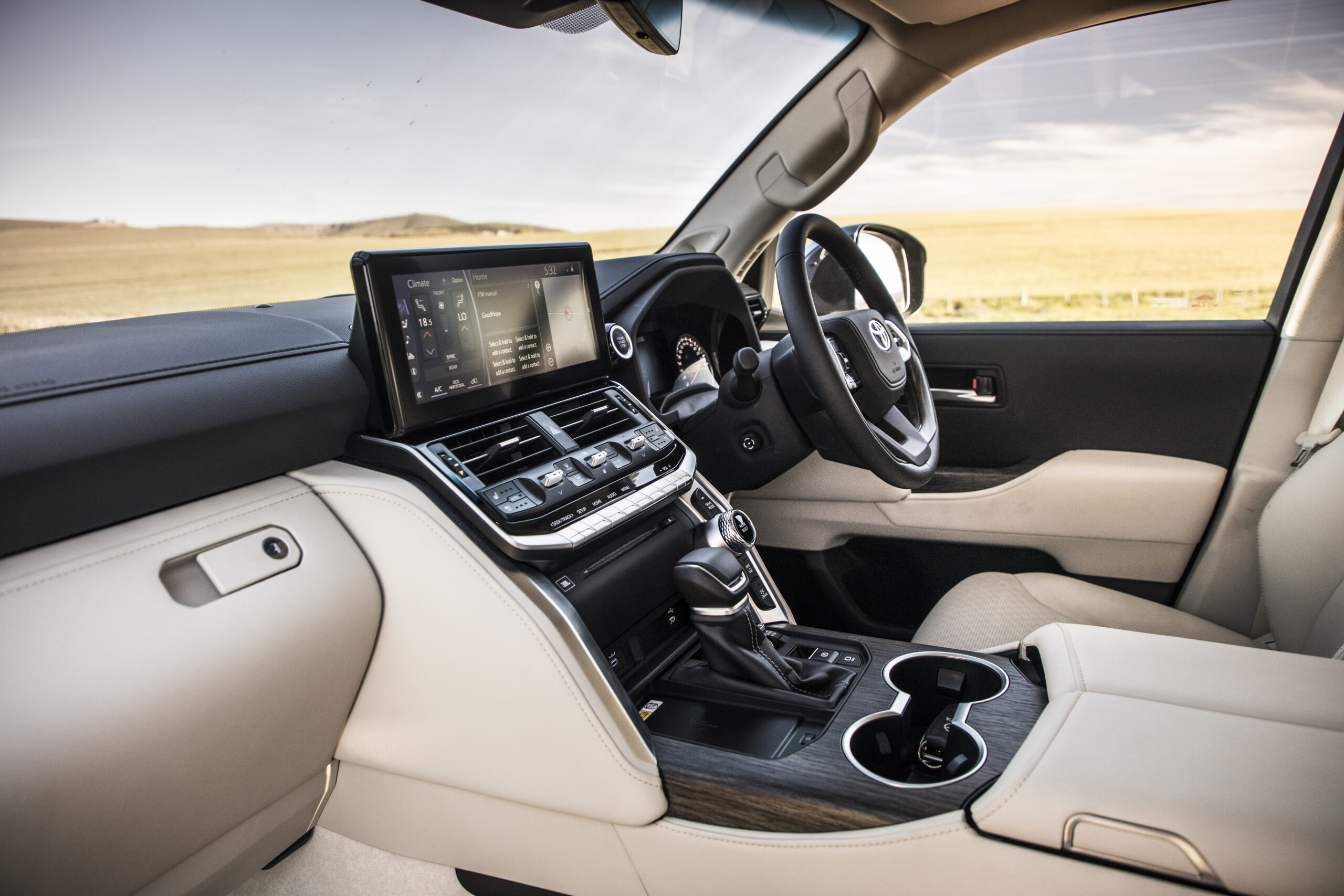 And once the tarmac ends? Well, we spent a couple of hundred kilometres barrelling along gravel roads in the Western Cape, which the heavyset 300 predictably handled with aplomb, soaking up even severe undulations and generally feeling reassuringly planted. We furthermore performed some (admittedly fairly uncomplicated) off-roading, powering through loose sand and crawling over rocky terrain with no hassle at all.

Where the down-specced, entry-level GX-R model – billed as a diesel-only utility option best suited to overlanding and undercutting higher-spec variants by a significant R500 000 – ships standard with a rear differential lock, road-biased ZX-badged versions feature a Torsen limited-slip differential (LSD). When turning and accelerating, the LSD optimally distributes torque according to the load experienced by the rear wheels. 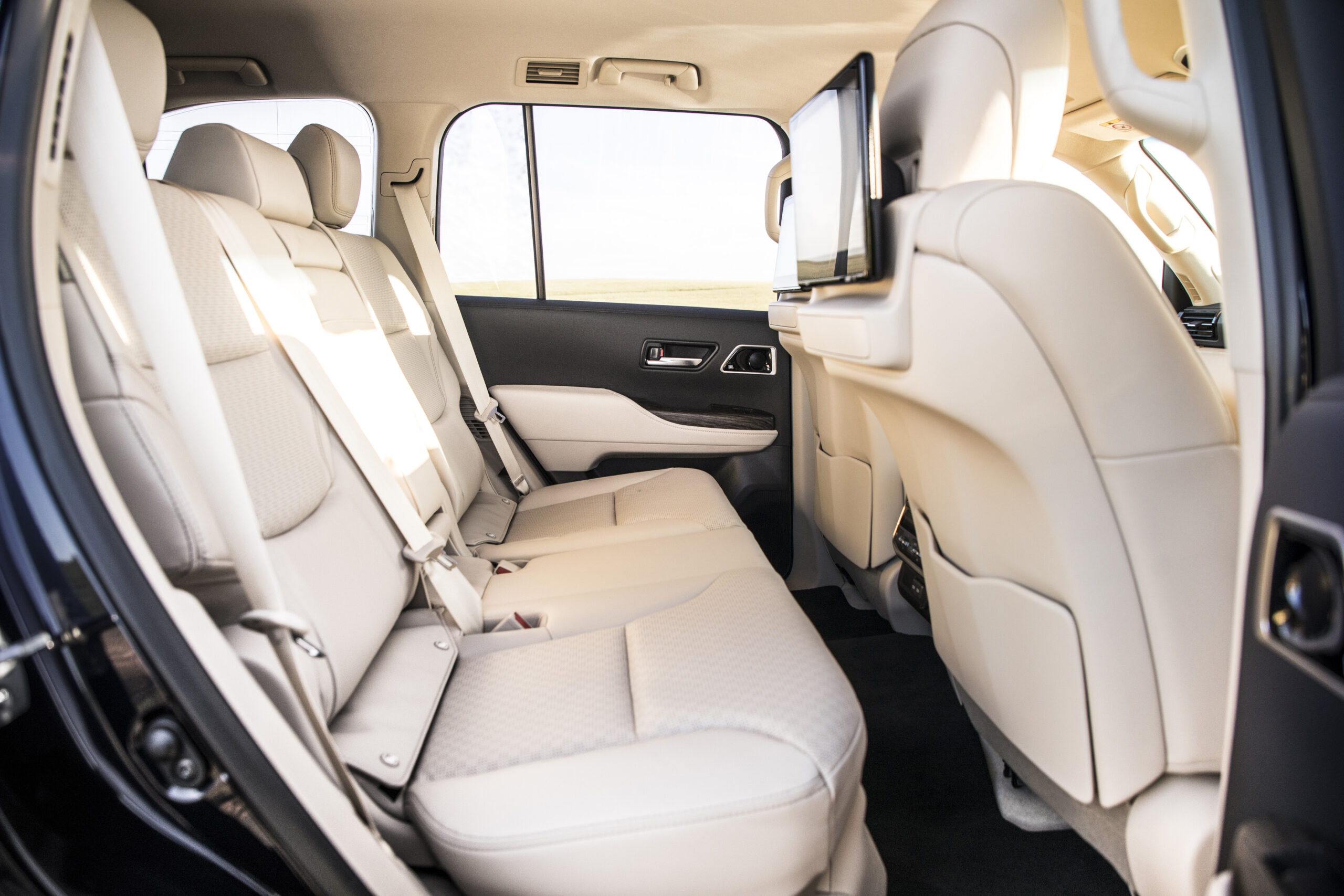 What about the interior? Well, in a world of facia-spanning touchscreens, the chrome-nosed ZX’s cabin is somewhat surprisingly – and rather refreshingly for those of us who lament the broader industry’s shift to touch controls – well endowed with physical buttons, switches and dials (a little overwhelmingly so, for first-time users). The apparent throwback theme (the interior design leader, Katsutoshi Shibuya, started his career on the Land Cruiser 80) continues with a DVD player (remember those?) and a smattering of wood panels, plus the beige leather upholstery you see in the accompanying images. The light-coloured material can mercifully be switched out for black or black-and-red schemes at no cost.

This isn’t to say the ZX grade of the Land Cruiser 300 is lacking in modern technology. On the contrary, it features a 12.3-inch touchscreen display (with Apple CarPlay and Android Auto functionality), power-adjustable (not to mention heated and ventilated) front seats, a centrally sited cool box, a brace of rear entertainment screens (each measuring 11.6 inches in diameter and employing wireless headphones), as many as nine airbags and all sorts of driver assistance kit (including an overly intrusive lane-correction system that can thankfully be manually deactivated). There’s no lengthy list of options here; only a towbar and certain exterior colours are listed as extras. 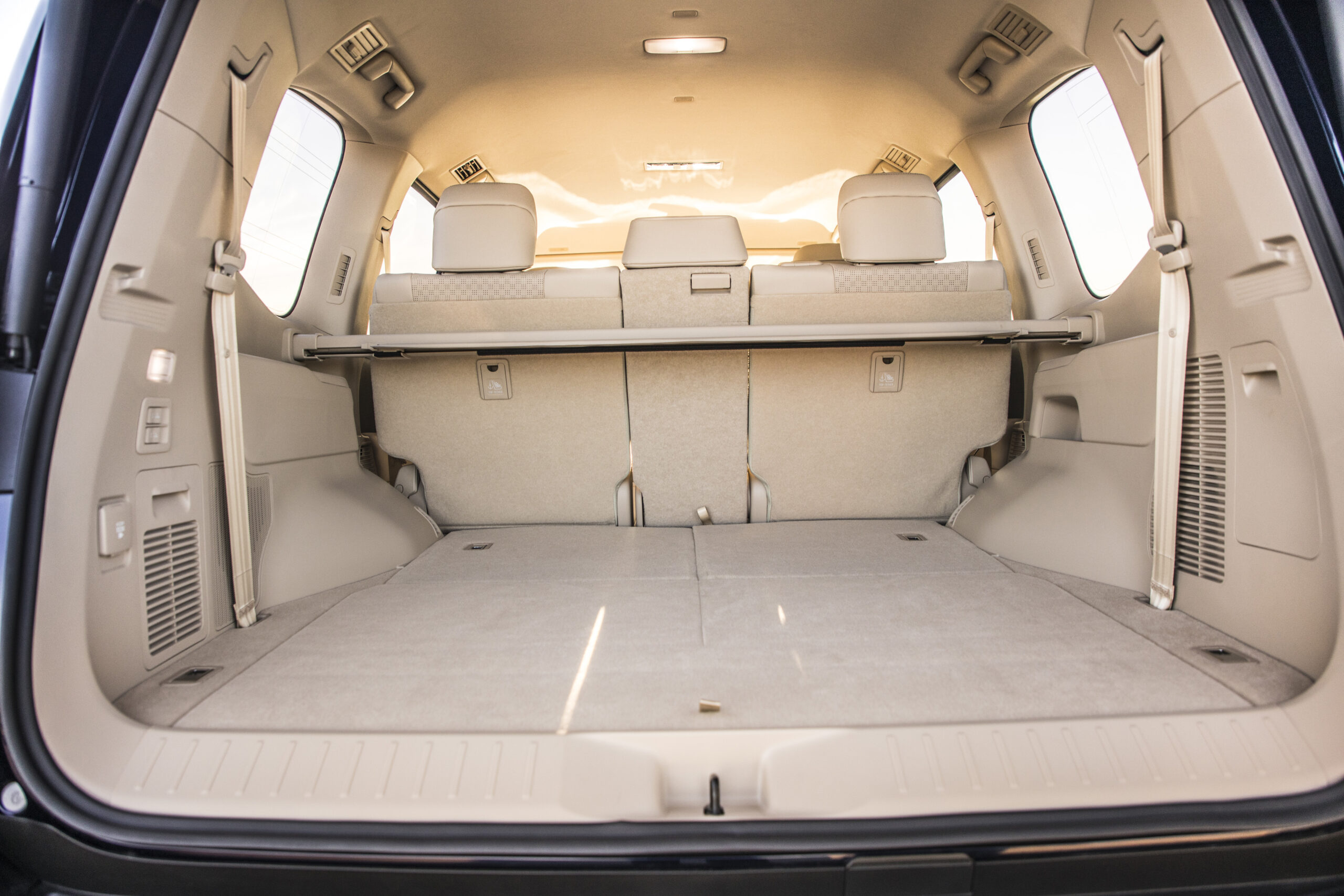 As was the case with the 200, space in the second row is plentiful. The most meaningful update comes in the rearmost string of seats, where the two occasional pews no longer fold up to the side when not in use but rather retract into the floor at the touch of a button. With the final row stowed in this manner, the width of the luggage compartment and thus its capacity improves drastically.

The Aichi-based automaker is hardly considered a luxury brand – there’s the Lexus division for that, after all – but the new Land Cruiser 300 certainly exhibits a newfound sense of plushness, whether you’re behind the wheel or in a passenger seat. In defiance of its robust underpinnings, it feels anything but utilitarian. Yet, Toyota’s most expensive model feels as capable as ever.

Of course, availability will likely remain a challenge for some time, both here in South Africa and indeed across the world. A gross undersupply courtesy of the production woes outlined earlier means prospective buyers are facing indefinite waiting times, a situation that will prove frustrating both for consumers and Toyota SA Motors.

Still, the Land Cruiser badge – the longest-surviving series in Toyota’s history (yes, preceding even the Corolla nameplate) – continues to resonate strongly with local buyers, as evidenced by the longevity of the likewise in-demand 70 Series, so many will be prepared to wait. This generation has been some 14 years in the making, after all. 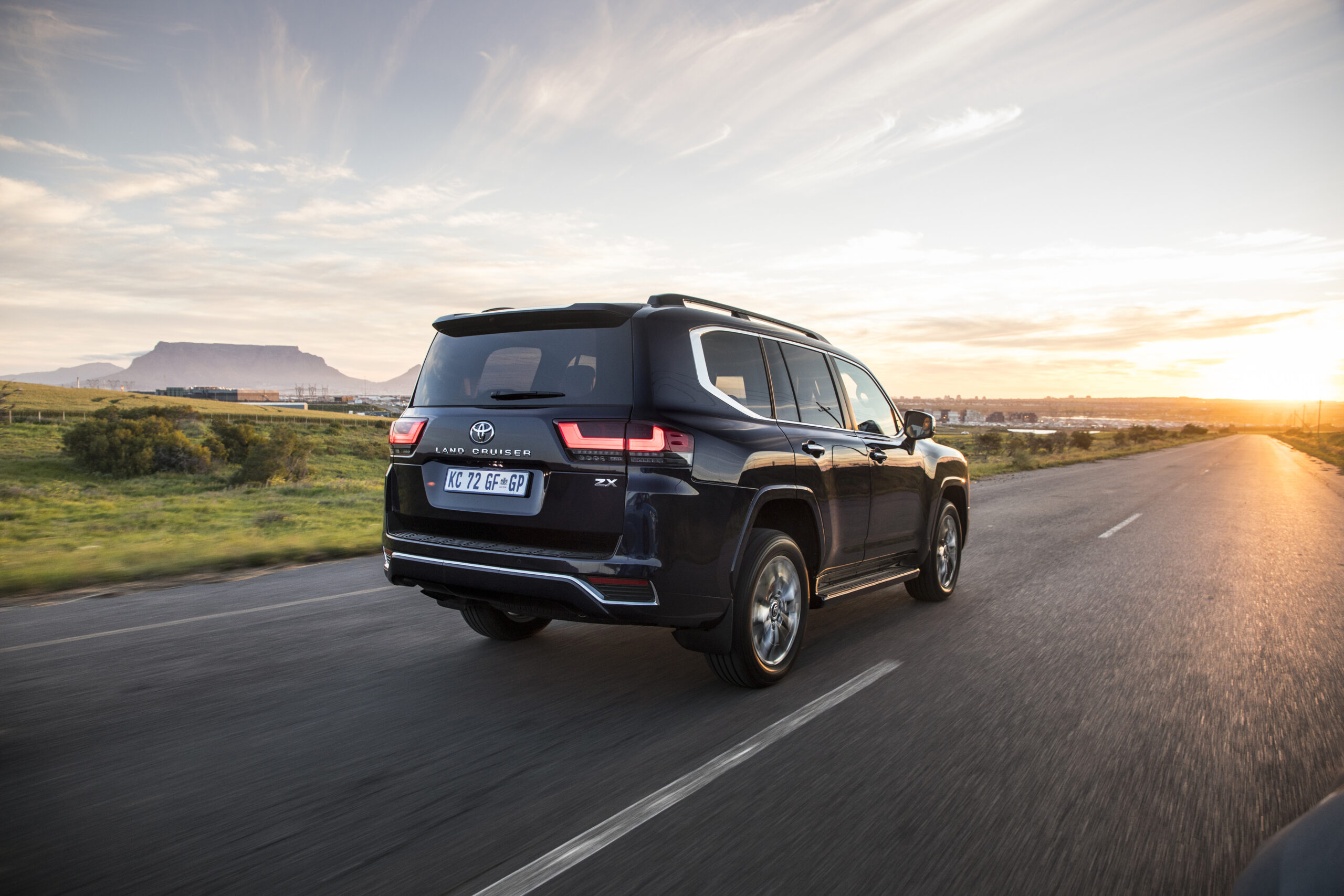 Ultimately, the new 300 stays true to the enduring Land Cruiser ethos, albeit with a further degree of sophistication. It retains – or perhaps even enhances – the capability of the preceding model but is patently better to drive on tarmac than before thanks to its new underpinnings and more advanced powertrains. Crucially, though, it still feels like a Land Cruiser. Master of Africa, remastered.