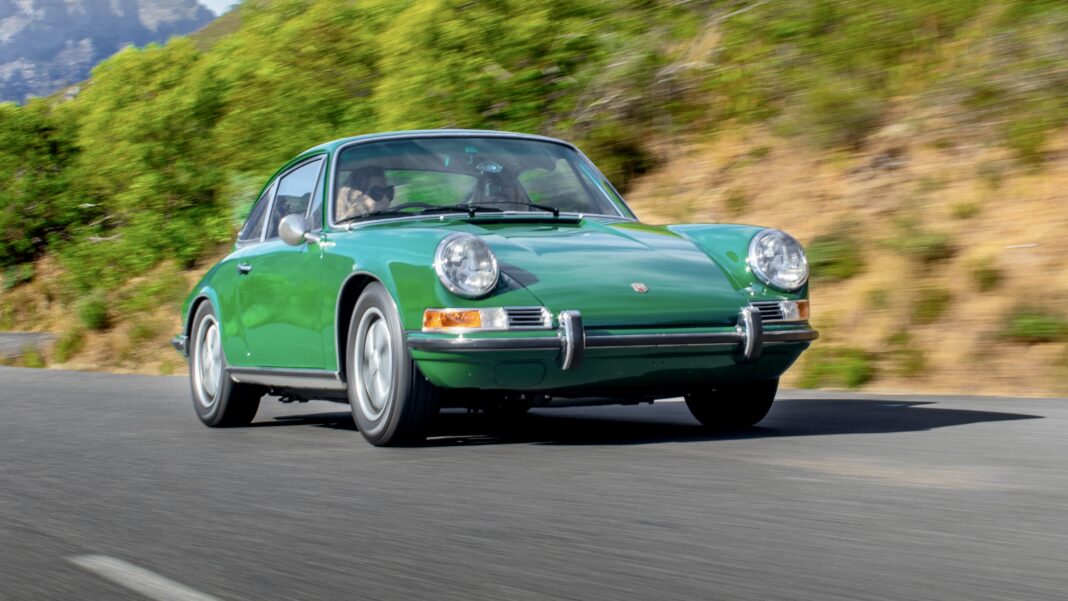 Arguably the most recognisable design in the motoring world, for some, the Porsche 911’s sempiternal silhouette bears a great deal of meaning. This timeless line has now found a place on skin.

Few motor vehicles are worthy of a “timeless” status. It’s cars embodying evolution rather than revolution. Arguably the most iconic sports car ever produced, the Porsche 911 is one. The designer of each iteration has had the challenging task to reimagine yet stay true to the original silhouette since the 911’s introduction in 1964. Celebrating a decade of exquisite tattoo design, we headed to Cape Electric Tattoo, located at the foot of Table Mountain, where owner and artist Waldo del Rocca meticulously reinterpreted the 911’s timeless silhouette onto my skin. 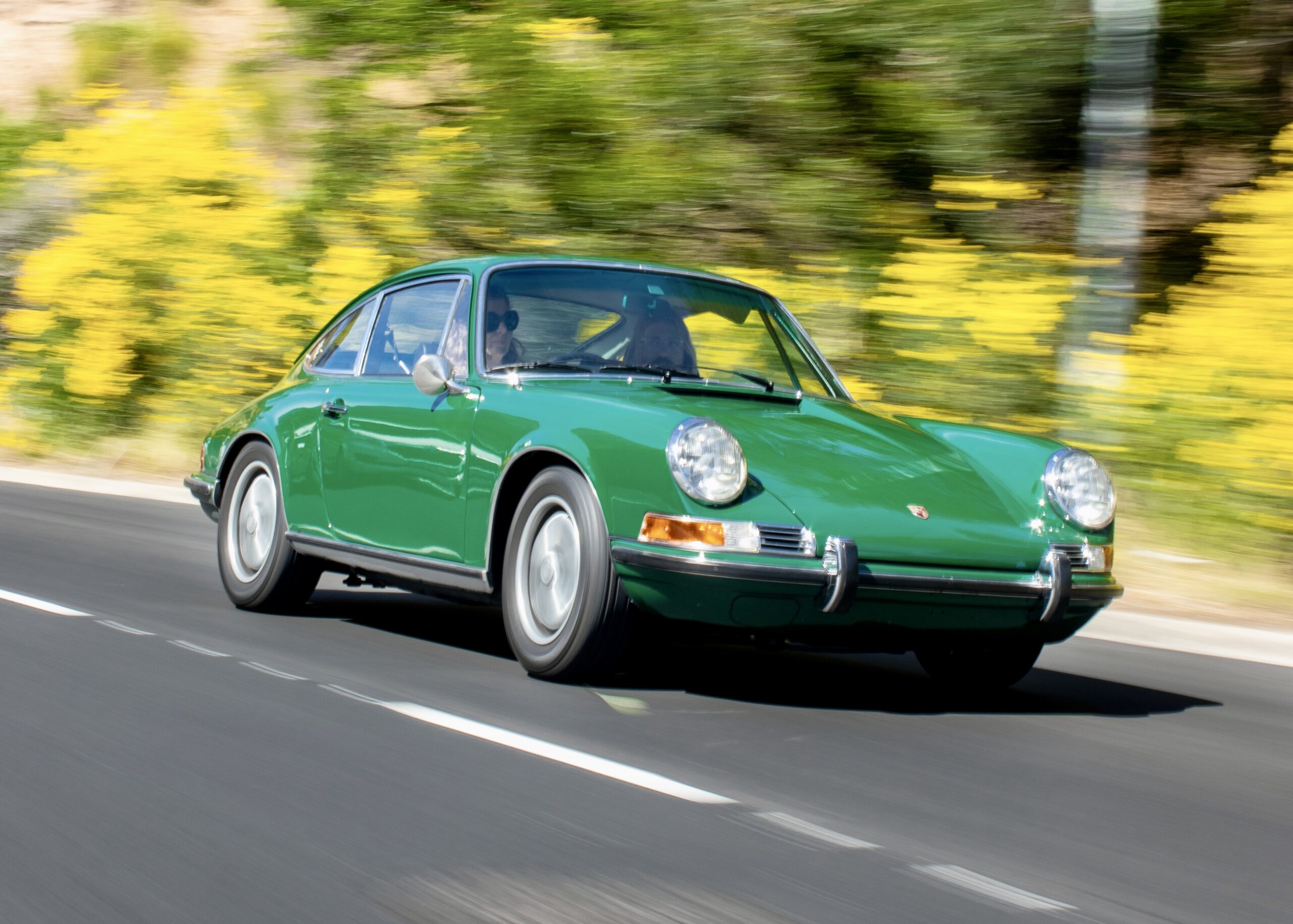 Why? Let me explain: for myself, the 911’s silhouette symbolises an eloquent quote by Dr Ferdinand Porsche, founder of the German marque – “Change is easy. Improvement is far more difficult.” It’s eight words I hold dear. It applies to Porsche improving the 911 over eight generations and to life. It symbolises that however difficult improvement may be, it is, indeed, possible.

For this reason, I decided to get a tattoo of the Stuttgart-based firm’s rear-engined sports car’s silhouette. Who better, then, to entrust etching this line into my skin than one of the globe’s most renowned tattoo artists. 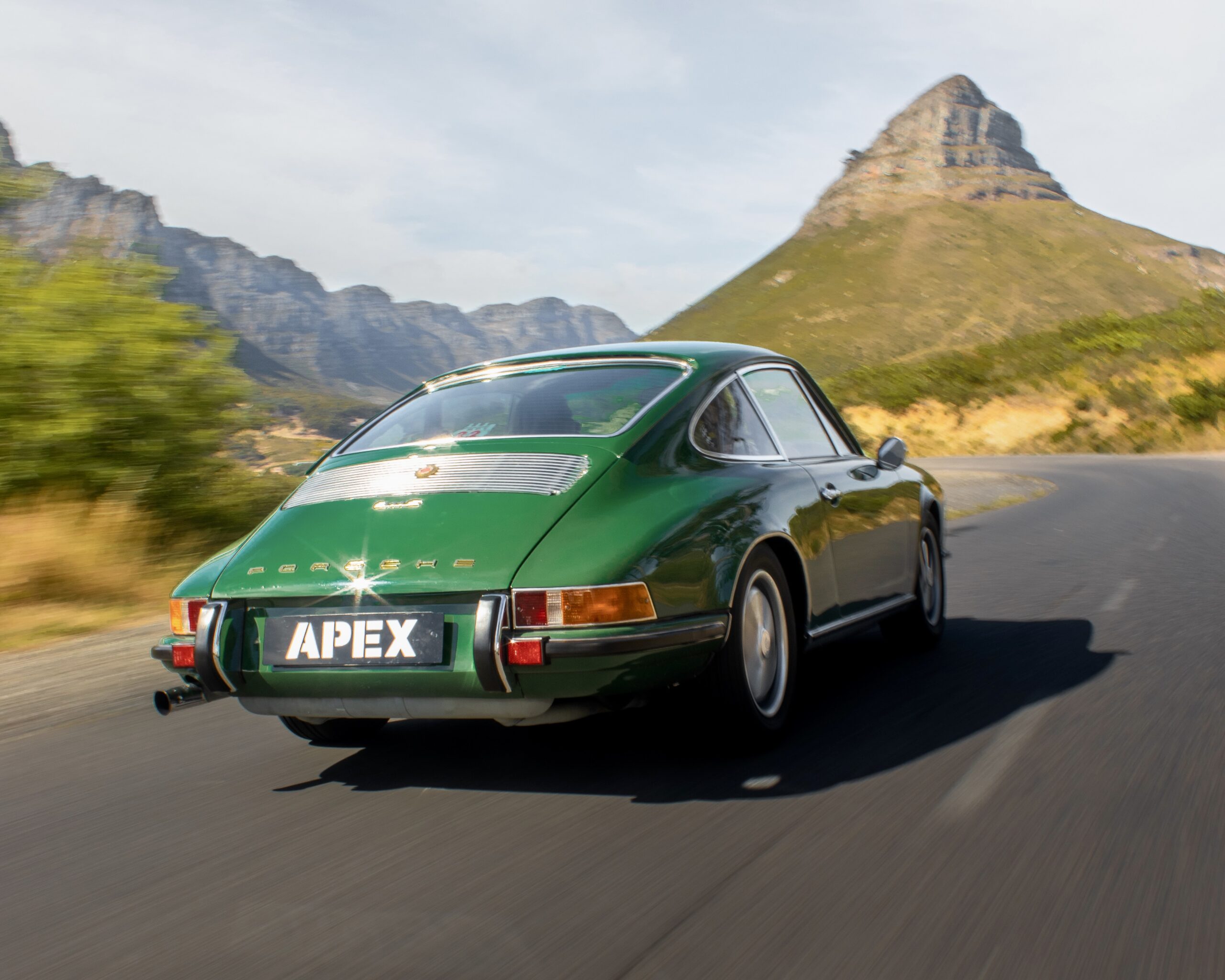 Waldo is part of the South African International Tattoo Convention (scheduled to again take place in Cape Town in 2023), where 100 of the world’s best tattoo artists get together to showcase their talent. Waldo is one of them. And he has proved it time and time again. He specialises in a large variety of designs, each of them exquisite, as I noticed when I entered the parlour.

The blueprint for the tattoo was an immaculate 1969 911 S, owned by Porschephile Michelle Hambly-Grobler, who came along for our trip. She has some ink of another iconic Porsche – a 356 Super 90 – herself. I had to ask her about it. She lit up, answering each of my questions with enthusiasm. “It’s something I’ve wanted for a long time,” she said excitedly. “I started with what I believe is the essence of Porsche. It’s a beautiful reminder of what I stand for. I love my tattoo. I look at it, and I get very happy.” 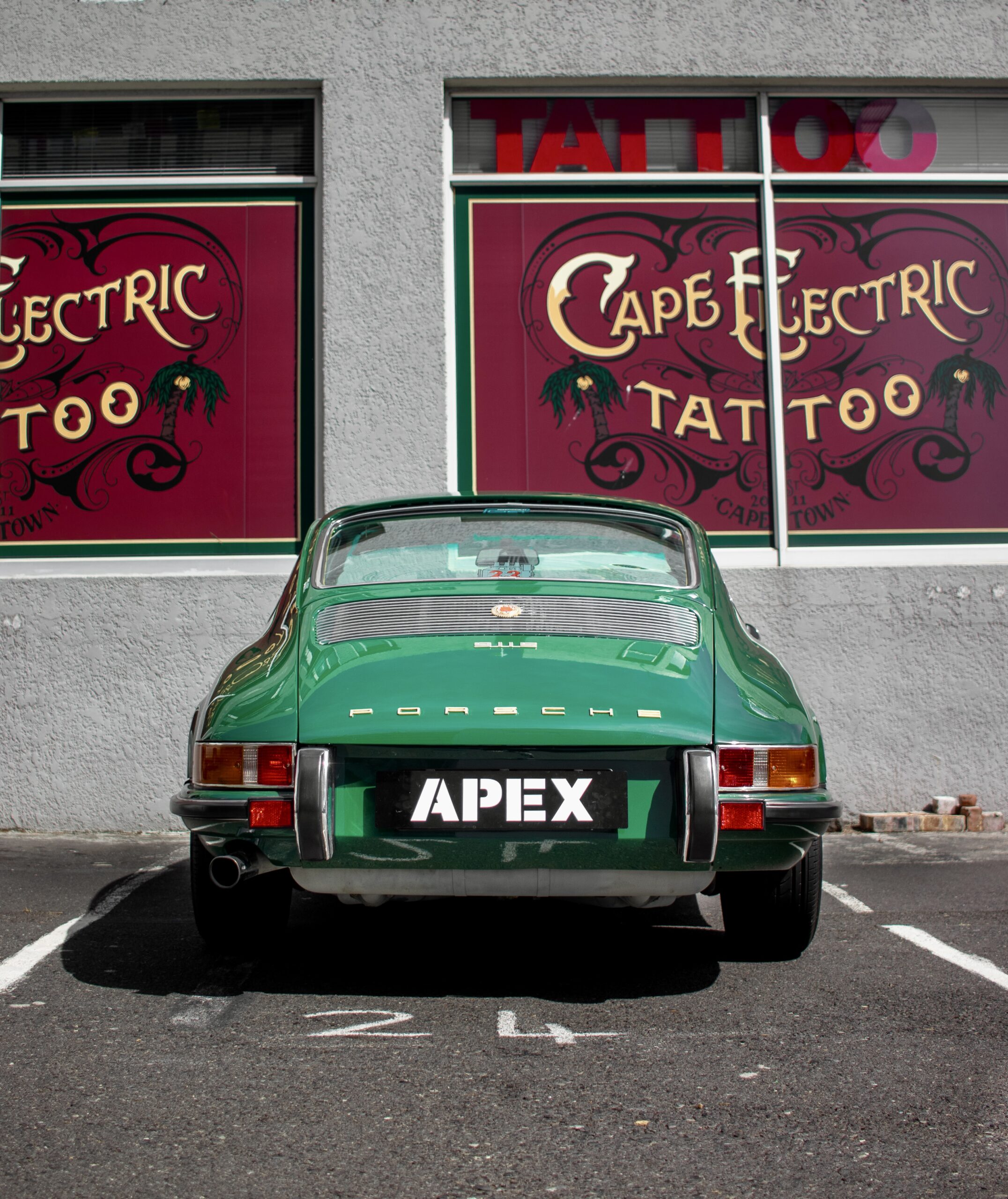 She could tell I was a bit nervous about getting my first tattoo. “There are no two ways that you can regret putting a 911 on your body,” Michelle reassured me. “It is a timeless piece of engineering.” It is. Although more than five decades old, the 1960s example we drove to Cape Electric Tattoo is entirely mechanically sound. It wants to be driven. And that’s precisely what we did on the sinuous, picturesque mountain road of Signal Hill, with the air-cooled, atmospheric boxer motor providing a suitable soundtrack, which would soon be replaced by the howling vocals of Led Zeppelin frontman Robert Plant.

Arriving at Cape Electric Tattoo, like myself, Waldo was enamoured with Michelle’s classic 911. We walked around the beautifully restored Porsche, with Michelle showing us each detail and telling us more about the car’s history. We instantly noticed the “Tattoo” lettering of the parlour’s sign reflecting off the roof. Indeed, this had to be an, ahem, sign. 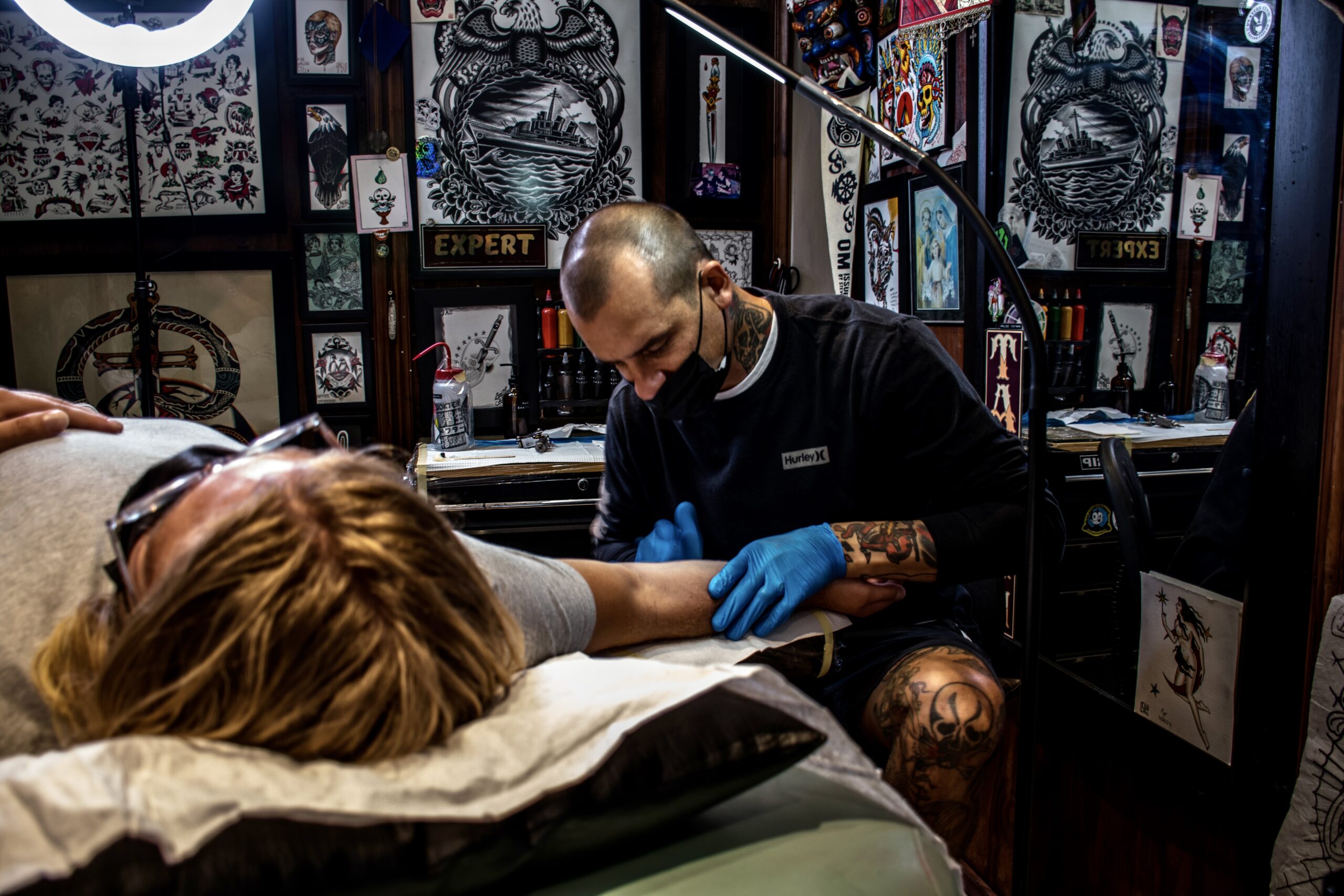 We stopped at the side of the Porsche. Waldo looked at the profile he would soon tattoo on me with a keen eye. An experienced artist, Waldo went inside to draw a few sketches of the silhouette. The sketches looked even better than what I could imagine. I walked up the stairs, where Waldo sat with his machine in hand. It’s a clean and sterile environment. I laid down on the tattoo bed and stretched out my right arm. The buzz of the tattoo device was accompanied by Stairway to Heaven playing on the stereo.

As Waldo started tattooing, I couldn’t help but think that, in 1981, the 911 was nearly discontinued, were it not for then-Porsche president and CEO Peter Schutz. As the story goes, when entering the office of then-lead engineer professor Helmuth Bott, Schutz noticed a chart hanging from the wall. 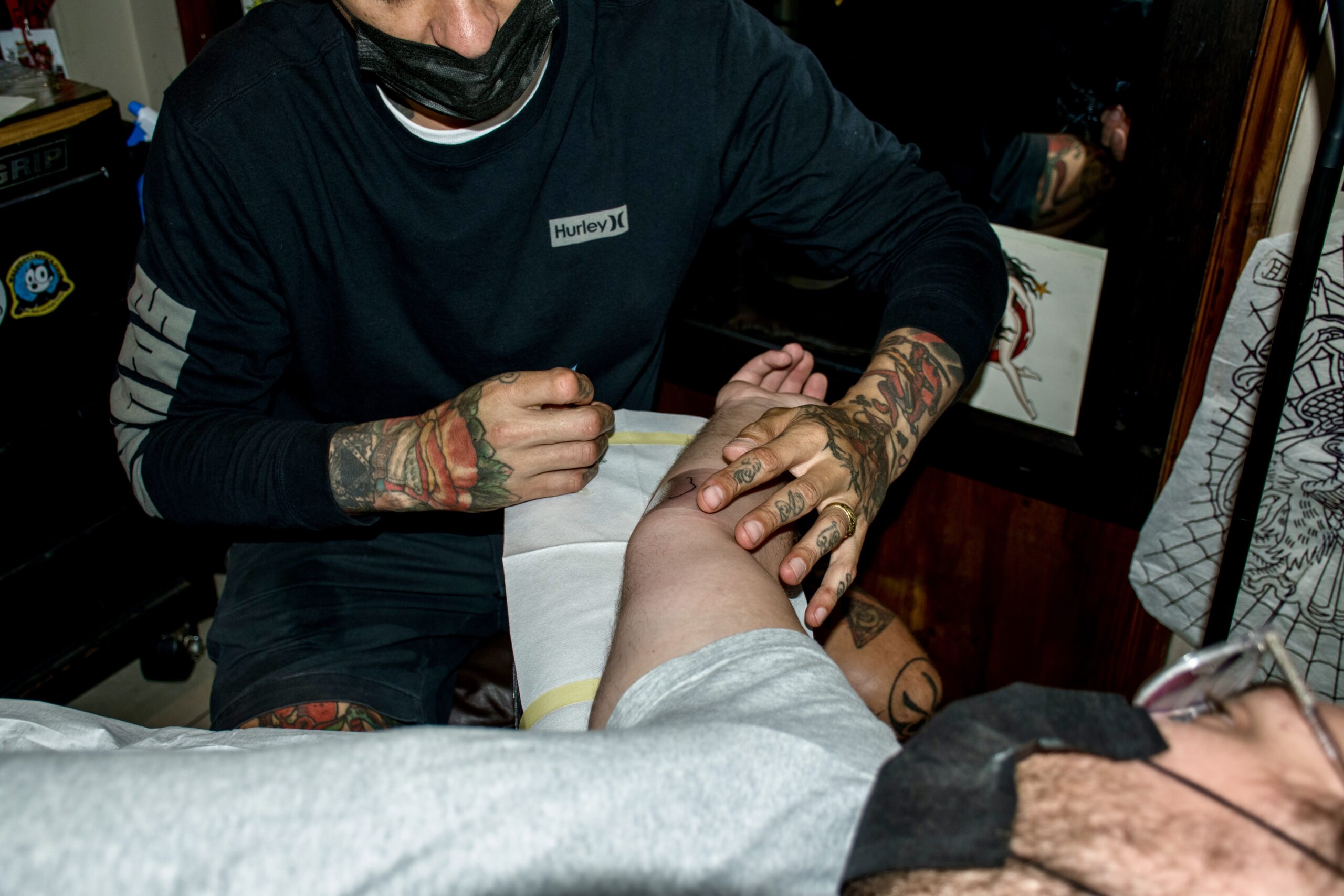 Tattooed by Waldo, a subtle curved line, followed by a straight line, extends diagonally upwards and then curves back down towards the end. This timeless line – the 911’s silhouette – continues still. And thanks to the exceptional tattooing skills, it is now, although small, etched onto my right forearm. 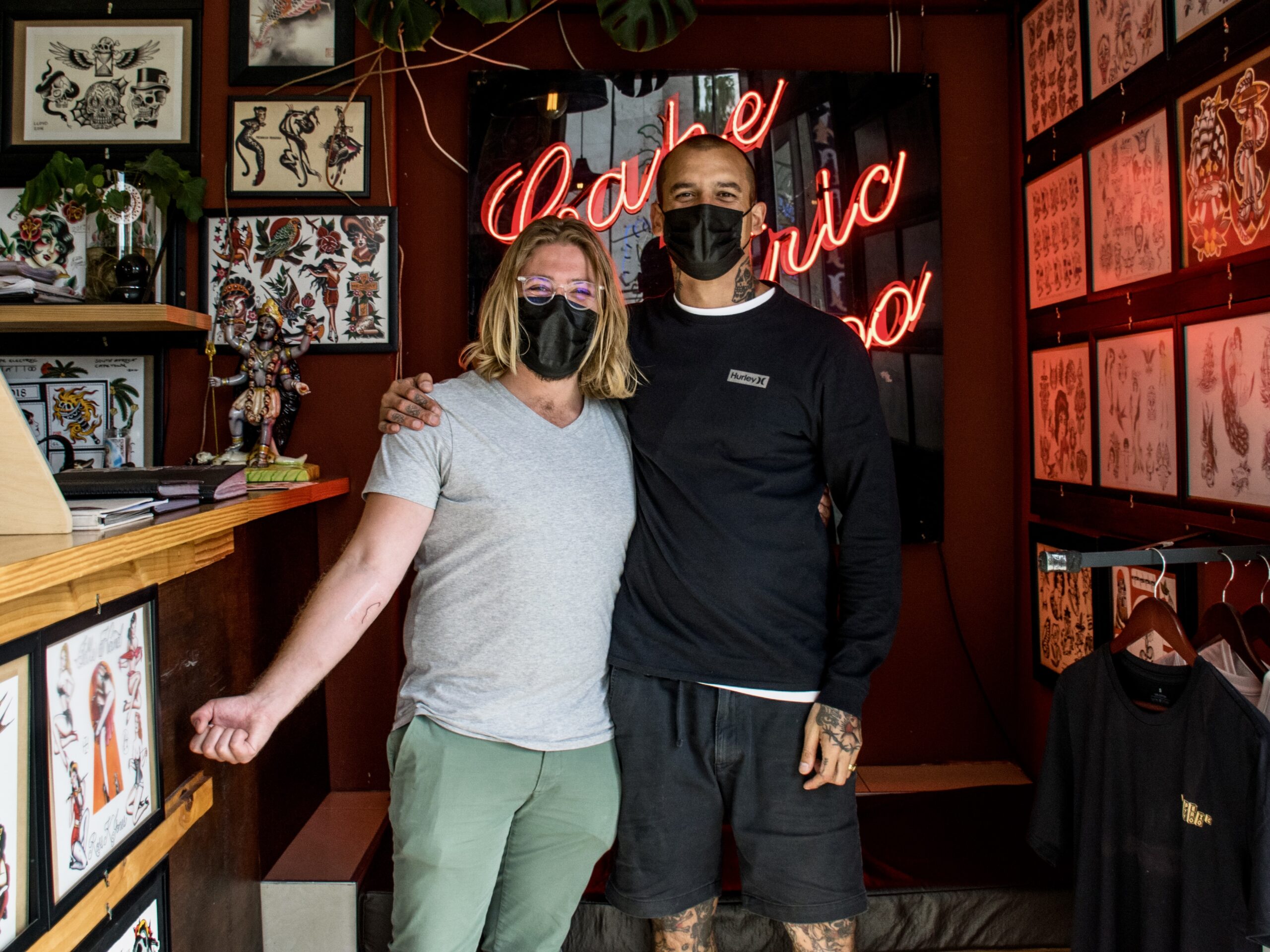 We want to thank Waldo del Rocca of Cape Electric Tattoo for exquisitely reinterpreting the 911’s timeless design in ink. For more information on Cape Electric Tattoo, visit their website at www.capeelectrictattoo.com, Instagram page at @capeelectrictattoo or contact 021 423 7646. Special thanks to Michelle Hambly-Grobler (@porschegirlct on Instagram) for joining us with her immaculate 1969 Porsche 911 S and putting the author’s nervousness at ease. It’s been a privilege.