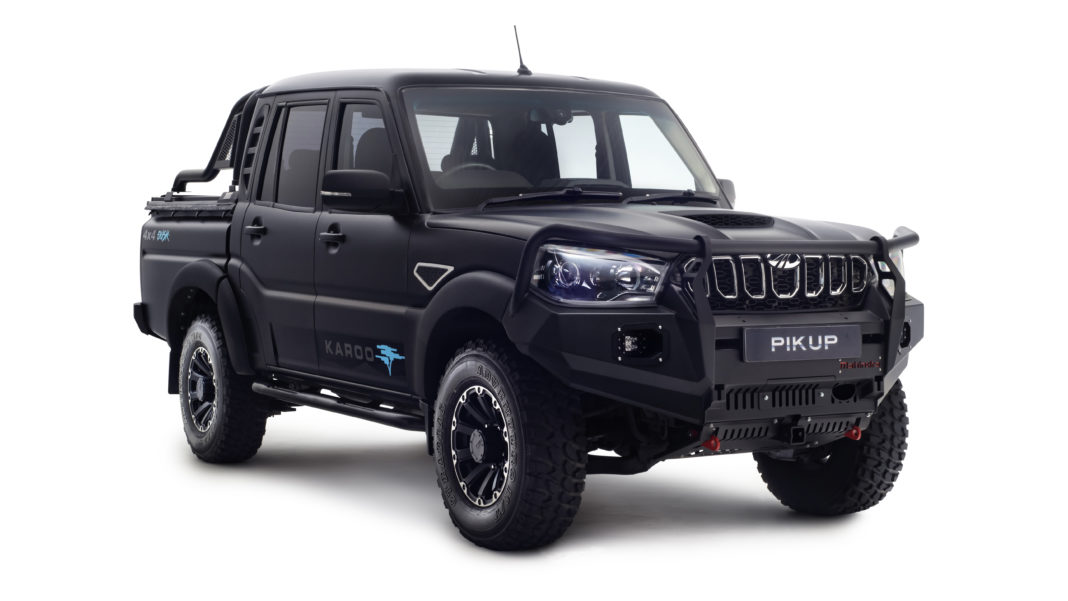 Mahindra has unveiled a new special edition of the Pik Up. Named “Karoo Dusk”, the latest version of the Indian car manufacturer’s double-cab bakkie was “inspired by the beautiful vistas of the Karoo”. See pricing below…

Based on the Pik Up S11 automatic, the Pik Up Karoo Dusk’s bodywork is wrapped in “striking”, hard-wearing matte black film. Based on the automaker’s flagship bakkie, the special model features a similar styling bar, sited on the load bed, a roller shutter, side-mounted steel side steps, and “robust” wheel arches. However, unlike the Pik Up Karoo it is based on, the new model’s exterior items have been colour coded to match its dark exterior look.

“The S11 Karoo Dusk is both stunning to look at, and ready for anything the road can throw at it”

In addition, Mahindra’s designers have created a “special” dark-blue hue for the “Dusk” decals and distinctive acacia tree in the logo. A set of 17-inch alloy wheels, finished in black and featuring silver detailing, completes the package. The unique alloys are fitted with General Tire rubber that adds an “aggressive” tread profile and visual appeal to the bakkie.

Mahindra has also added a set of off-road steel bumpers, designed with overlanding in mind. These items, Mahindra claims, increase the approach and departure angles of the Pik Up. The front bumper is equipped with LED spot lamps, recovery loops and mounting points for a jack. The rear bumper features mounting points for a high-lift jack, extra heavy-duty recovery loops and a tow bar with flush-mounted electric connection as standard.

“The Karoo has a special place in South African culture. It is simultaneously known for the hard and unforgiving landscape and the openness of its hard-working inhabitants,” Rajesh Gupta, CEO of Mahindra South Africa, says. “That is what inspired us with the creation of the original Pik Up Karoo. Now we are stepping it up with the S11 Karoo Dusk, which is both stunning to look at, and ready for anything the road can throw at it.”

The Mahindra Karoo Dusk is available in “extremely” limited numbers and is priced at R549 999. A five-year/90 000 km service plan and four-year/120 000 km mechanical warranty are included in the price.