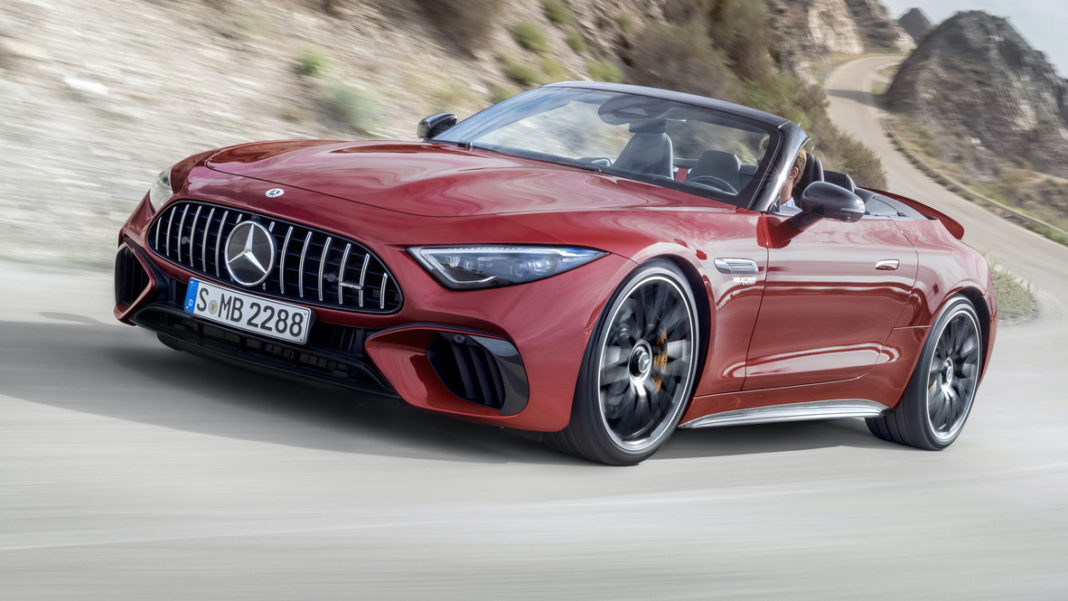 Mercedes-Benz has whipped the wraps off the new-generation SL-Class, with the latest model boasting sharper styling, “top-level” luxury and comfort, and “typical” AMG driving performance.

Said Philipp Schiemer, chairman of the board of management of Mercedes-AMG GmbH, “The new SL combines the sporty genes of the original SL with the driving performance typical of AMG. At the same time, it offers luxury and comfort at the absolute top level.” According to Schiemer, this combination (of luxury and comfort, and performance) is “unique” in the sportscar segment.

The exterior styling is an amalgamation of Mercedes’ “sensual purity” design philosophy and the “sporty genes” of AMG. According to Benz, “The enlarged dimensional concept with 2+2 seats offered the designers more freedom in their design possibilities.” “Unmistakably” Mercedes-AMG, the new model’s AMG-specific radiator grille “characterises” its “powerful” front end and “cites the ancestor of all SL models”, the 300 SL. “For added presence”, “extremely” thin LED headlamps, incorporating sharp daytime-running lights, flank the panamericana item.

The front apron features what Mercedes calls a “jet wing”. The large outer air intakes extend towards the centre and channel airflow to the radiators with three vertical fins. “The wide front splitter acts as an additional aero element.

According to the German marque, the Z-fold soft top enabled designing a “low” and “powerful” rear end. Tapered LED taillamps accentuates the rear.

Depending on the speed, the active spoiler, which is “seamlessly” integrated into the boot lid at speeds of up to 80 km/h, is engineered to extend to four positions. However, the speed thresholds of the latter item vary when specifying the SL with the optional aerodynamics package.

At launch, two models will be on offer, with an E-Performance variant to follow in the future. The SL 55 and SL 63 are both powered by Affalterbach’s 4.0-litre twin-turbocharged V8 petrol engine, tuned to deliver 350 kW and 700 N.m in the SL 55 and 430 kW and 800 N.m in the 63-badged version. Both models feature AMG’s nine-speed Speedshift MCT transmission and 4Matic+ all-wheel-drive system.

According to Mercedes, the SL 55 accelerates to the three-figure marker from standstill in 3.9 seconds before reaching a top speed of 295 km/h. The SL 63, meanwhile, completes the obligatory zero to 100 km/h sprint three-tenths of a second quicker than the aforementioned derivative and tops out at 315 km/h.