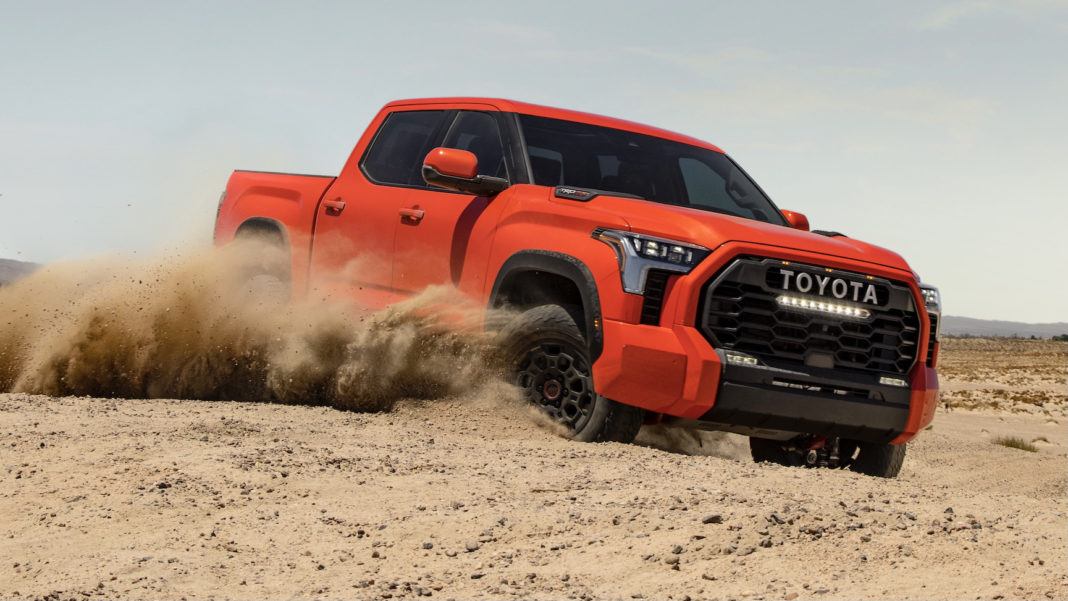 Toyota has whipped the covers off the all-new Tundra. Available exclusively in the United States, the new-generation version was redesigned from the ground up to be the “toughest” iteration yet.

Built from the ground up, the new Tundra is underpinned by an all-new chassis, comprising high-strength steel for increased rigidity. Aluminium, meanwhile, was used in “key” areas to help save weight. Thanks to its new sheet-moulded compound (SMC) construction, the load bed is “lightweight” and “extremely strong”.

The newly revealed Tundra is equipped with a “newly developed” double wishbone front and multi-link rear suspension setup, and features twin-tube shocks all-round. Fitted with the option TRD off-road pack, the standard shocks are ditched for a set of monotube Bilstein items. A first for the Tundra, Toyota offers adaptive variable suspension.

The new Tundra is powered by Toyota’s new, “highly efficient” 3.5-litre V6 engine, which is available in a duo of configurations. As standard, the twin-turbocharged motor produces “up to” 290 kW and 649 N.m of torque. However, when paired with a “brilliantly engineered” bell-housing motor system called i-Force Max, the V6 petrol churns out 326 kW and 790 N.m. Both configurations are coupled to a new 10-speed automatic transmission. Toyota claims the Tundra has a maximum towing capacity of 5 443 kg.

Inside, an eight-inch touchscreen is standard. A 14-inch touchcreen, complete with “improved” screen resolutions for “crisp” visuals, is available as an option. A 12.3-inch digital driver’s display can also be specified.

“The interior was meant to retain that ‘Technical Muscle’ motif. Calty chose a horizontal layout theme as a departure from the vertical layout on most other trucks in the market. This complemented the design goal to integrate the instrument panel and center stack to flow with the interior layout,” Toyota says. “Premium materials were also a must for a truck with a strong pedigree like [the] Tundra’s, especially in high-contact areas, which is why wrapped armrests, pads across the dash, doors and other areas are employed on most trims.”

Like the previous-generation model, the new Tundra will be assembled at Toyota Motor Manufacturing Texas (TMMTX) in San Antonio.