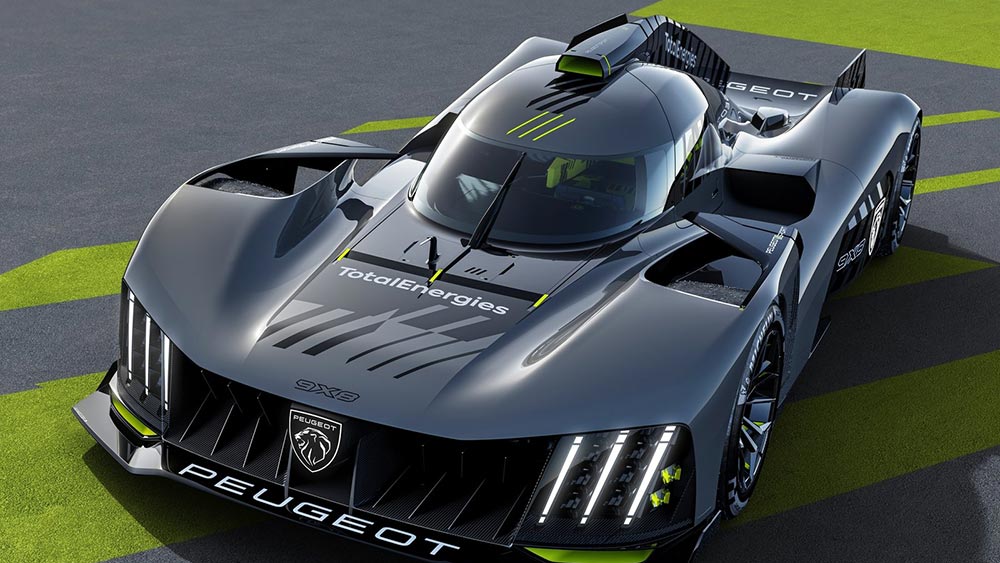 Scheduled to make its competitive debut in the FIA World Endurance Championship (WEC) in 2022, the Peugeot 9X8 has been revealed. A direct successor to the Le Mans-winning Peugeot 905, the 9X8, the French manufacturer says, is poised to continue the marque’s long as successful involvement in motorsport. A duo of 9X8s will compete in the FIA WEC.

Peugeot’s latest-generation hypercar is powered by a hybrid powertrain comprising a rear-mounted 2,6-litre twin-turbocharged V6 engine and a front-mounted electric motor, which produces 200 kW. Together, the internal combustion-electric powertrain produces a total power output of 500 kW. Power is directed to all four wheels through a seven-speed sequential gearbox. According to Peugeot, the hybrid powertrain has been “clocking up kilometres on the bench since April”. The 9X8’s 900 V, high-density battery is co-developed by Peugeot Sport and Saft, a subsidiary of TotalEnergies.

The 9X8’s exterior design, Peugeot design director Matthias Hossann says, expresses the French brand’s styling cues, while its sleek, racy, elegant forms inspire emotion and dynamism.  “Since the 9X8 is a Peugeot, the original sketch that steered our work portrayed a big cat ready to pounce, a stance which we have suggested by the slightly forward-tilting cockpit,” Hossann says.

The exterior styling feature “finely chiselled” details, such as the brand’s claw-effect lighting signature for the front and rear lamps, the latter of which flank a wide diffuser with the inscription “We didn’t want a rear wing”. According to Stellantis’ motorsport director Jean-Marc Finot, the absence of a rear wing on the 9X8 is a “major” innovative step. Said Olivier Jansonnie, WEC programme technical director at Peugeot Sport, “the regulations stipulate that only one adjustable aerodynamic device is permitted, without specifying the rear wing. Our calculation work and simulations revealed that high performance was effectively possible without one.”