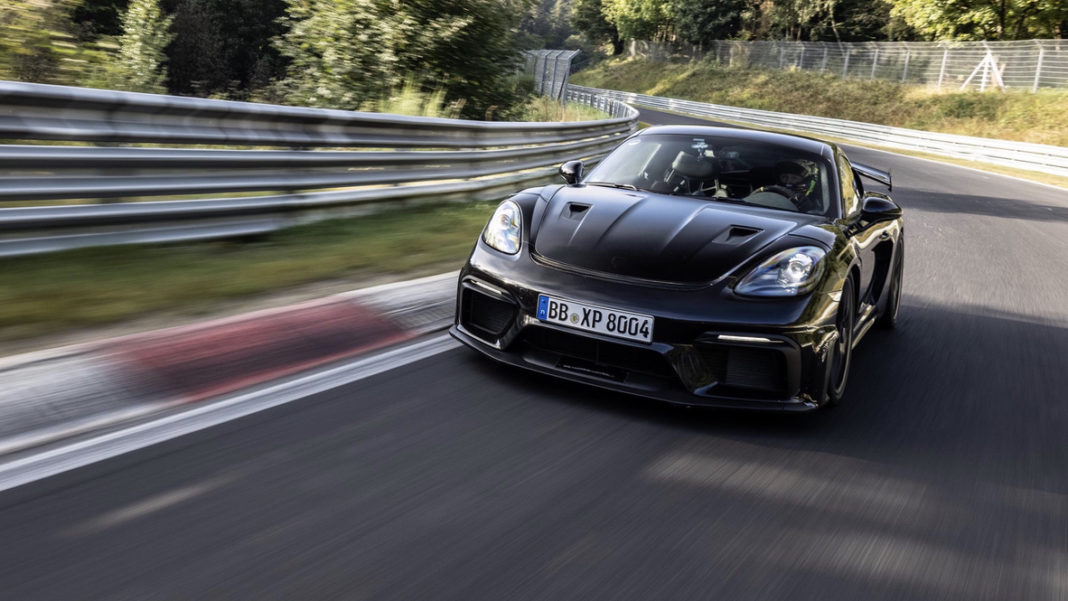 Porsche has announced the Cayman GT4 RS has “excelled” during the final stages of testing at the Nürburgring Nordschleife, with the German marque saying the first 718 to don the RS moniker has “impressively demonstrated its dynamic potential both on twisty mountain roads and on the racetrack”. Watch the short video footage below…

Scheduled to be officially unveiled in November 2021, the most hardcore 718 lapped the 20.832 km circuit in 7 minutes 09.30 seconds. The “lightly disguised” production version – indeed, a notary confirmed the standard condition and weight of the car – was also tested on the 20.6 km lap of the Green Hell.

On the shorter lap, Porsche brand ambassador and development driver Jörg Bergmeister set a time of 7 minutes 04.511 seconds in the upcoming 718 Cayman GT4 RS. That’s a whopping 23.6 seconds faster than its non-RS-badged Cayman GT4 sibling. According to Porsche, as part of the development process, Bergmeister has devoted “more than” 500 hours to the 718 Cayman GT4 RS during test and tuning drives.

Said Bergmeister, “The 718 Cayman GT4 RS is an uncompromising driving machine. It feels as nimble as a go-kart on mountain roads, yet is impressively stable and well-balanced on the racetrack. Otherwise, such a lap time wouldn’t even be possible. The [Cayman] GT4 RS is one of the sharpest cars Porsche has ever developed. And you really have had to experience the breath-taking noise it makes for yourself.”

To protect Bergmeister, who has devoted more than 500 hours to the 718 Cayman GT4 RS during test and tuning drives as part of the development process, Porsche equipped the mid-engined sports car seen here with a racing seat. The 718 Cayman GT4 RS seen here was fitted with a set of (optionally available when launched) Michelin Pilot Sport Cup 2 R tyres.

“During development, we gave the 718 Cayman GT4 RS everything that characterises a genuine RS: lightweight construction, more downforce, more power and, of course, an even higher level of responsiveness and feedback to driver inputs,” Andreas Preuninger, directors GT model line, says. “The fantastic lap time of the Nordschleife is impressive proof of how clearly noticeable these improvements in driving dynamics are. Our customers can look forward to a pure driver’s car that makes a thrilling driving experience an absolute priority.”