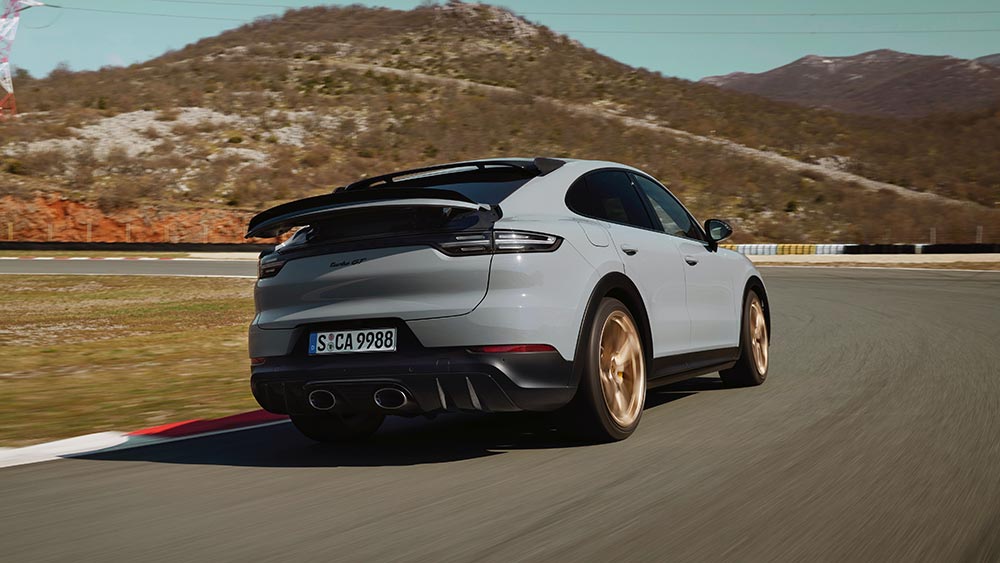 The Porsche Cayenne Turbo GT has touched down on South African shores, with the local arm of the German marque revealing pricing for the Nürburgring lap record-setting performance SUV.

The interior is lavishly trimmed in Alcantara, and features Porsche’s next-generation infotainment system. The latter unit incorporates Apple CarPlay and Android Auto screen mirroring and Bluetooth connectivity. Indicating this is, indeed, a special Cayenne, the model designation is featured on the fore and aft headrests.

The exterior is distinguished from the non-GT Cayenne with the addition of, among others, a model-specific front apron and enlarged side cooling air intakes. For increased downforce, the Turbo GT’s adaptive rear spoiler lip is 25 mm larger than that fitted to the Turbo. 22-inch GT-design wheels, carbon ceramic composite brakes and a sports exhaust system ship as standard.

The Cayenne Turbo GT Coupé is endowed with a 4.0-litre, twin-turbocharged V8 petrol engine, producing 471 kW and 850 Nm for a zero to 100 km/h acceleration time of 3.3 seconds and maximum speed of 300 km/h. Power and torque are sent to all four corners via a faster-shifting eight-speed Tiptronic S transmission.

For the Turbo GT, Porsche has also tweaked the traction management system. The passive chassis components and active control systems, meanwhile, have been re-engineered and optimised for handling and performance.

As a reminder, earlier this year, the Cayenne Turbo GT dethroned the Audi RS Q8  as the quickest SUV to ever lap the Nürburgring Nordschleife. The Porsche completed a lap of the testing racecourse in 7 minutes 38.925 seconds.