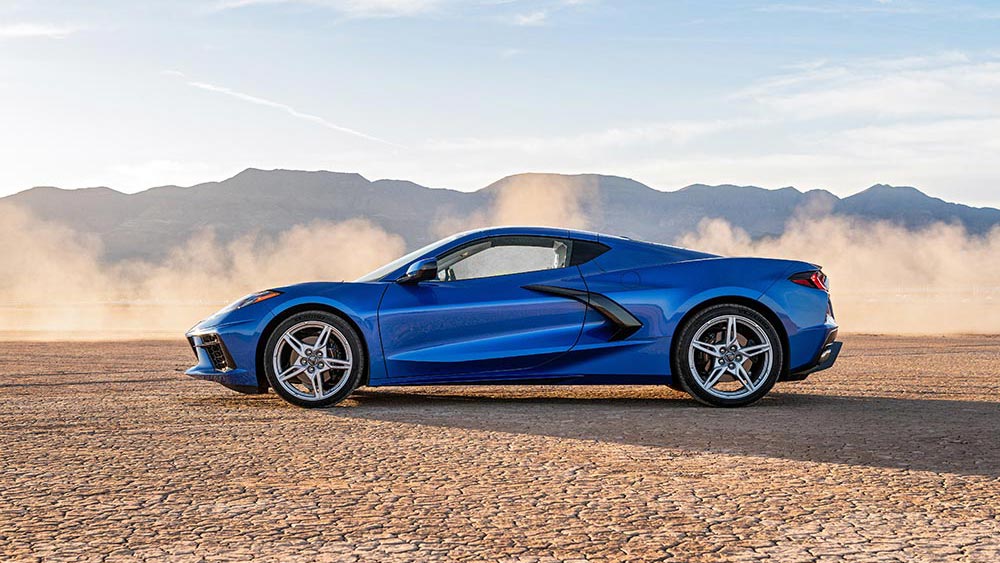 Its engine might have moved midships, but the new Corvette remains as rewarding to drive as ever. We piloted the rejigged icon in Dubai.

Radically altering a tried-and-proven recipe is fraught with danger. Get the formula even slightly wrong, and the magic is lost. There’s also the fact that many people don’t like change. Keep giving them what you’ve always dished out and they’re happy. However, the argument for reinventing a successful formula is that you may learn from past experience to create something that’s substantially better than before.

All of the above applies to some degree with the new C8-generation Chevrolet Corvette, which throws tradition out the window by ditching the familiar front-engine format by relocating its V8 motor behind the passenger compartment. Chevrolet execs have justified the move by saying they had taken the old configuration as far as it could go and that this was the only way to make the Corvette into the car they had always envisioned. 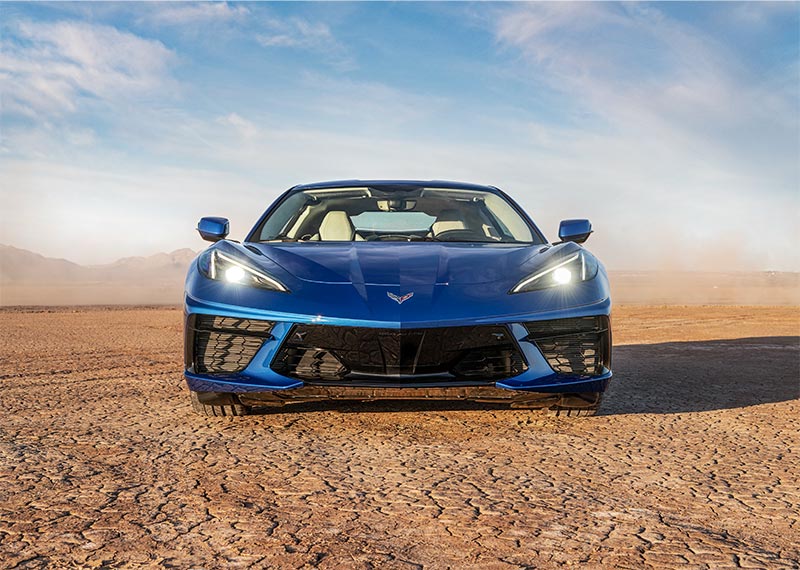 If the Corvette C8 were stripped of its badges, many would be clueless about its identity.

A quick glance at the accompanying images is probably enough to glean the C8 doesn’t embody the long-snout-shorttail proportions that have been a hallmark of every Corvette since the 1953 C1. In fact, if the new-gen Sportster was stripped of its badges, many may be clueless about its identity. Although there are a few vaguely familiar Corvette styling cues in there – such as the taillights – the C8 basically comes across as an amalgam of Ferrari, Lamborghini and McLaren design elements. The C8 isn’t a classical beauty, but it’s still a visually striking car that drips aggression. 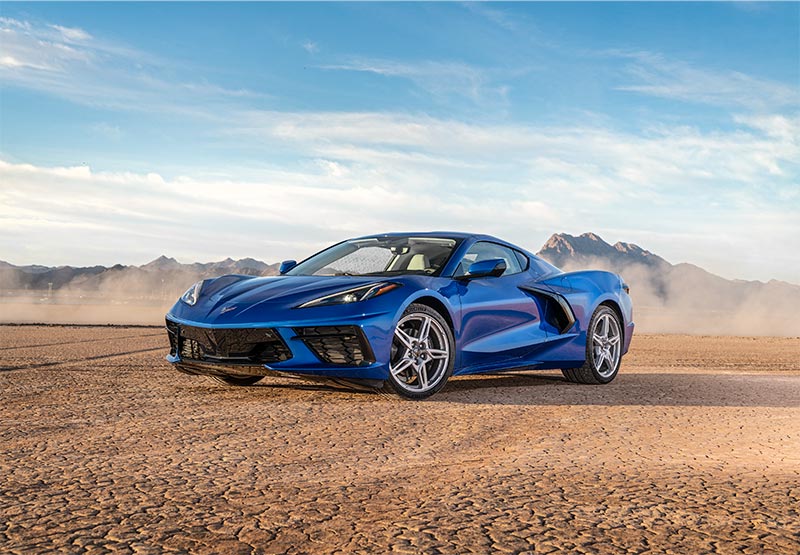 However, the real magic with the new Corvette happens when you slide into the low-slung seat and fire up that V8. It may have moved aft of the cabin, but the 6.2-litre V8 still sounds every bit as good as any of its predecessors, especially when you bury the throttle and get it bellowing at full song. It’s rapid, too, as reflected by a 0-100 km/h sprint in 3.1 seconds and top speed of 312 km/h. When you factor in that the C8 Corvette starts at just $60 000 (about R900 000) in the US, it’s clear you get ample bang for your buck here. Its performance is within sniffing distance of the Ferrari F8 Tributo, Lamborghini Huracán Evo and McLaren 570S, yet the Chevy costs less than a a third of any of this trio. 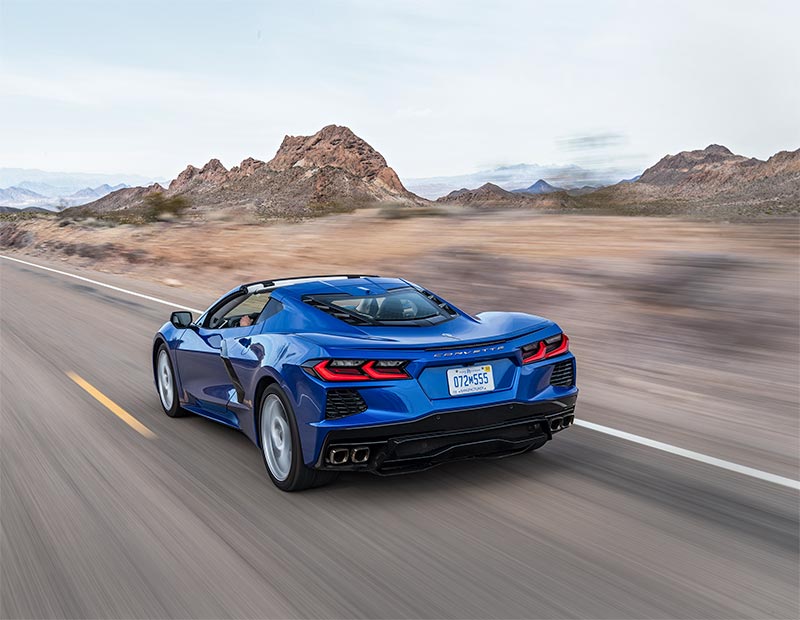 The 6.2-litre LT2 motor is an updated version of the familiar LT1 pushrod V8 and features tech we’ve come to expect, such as direct injection and cylinder-deactivation to boost fuel economy.

That said, the LT2 gains a more aggressive camshaft, as well as freer-flowing exhaust and intake manifolds that combine to bump up power by 22 kW over the LT1. The net result is outputs (with the optional sports exhaust system) of 369 kW and 637 Nm.

However, the real tech highlight with the LT2 is a brand-new dry-sump lubrication system that ensures the engine has a constant supply of oil pressure, even during sustained 1.0 G cornering. The reservoir is bolted to the front of the engine, between it and the firewall. 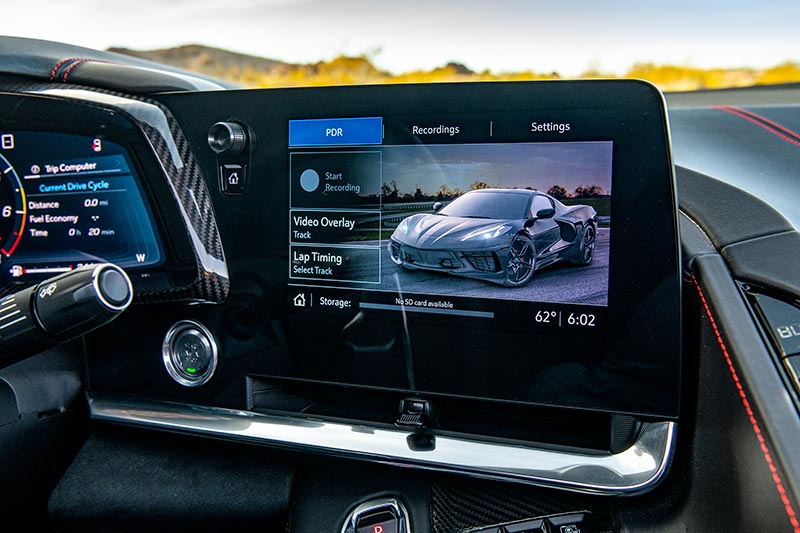 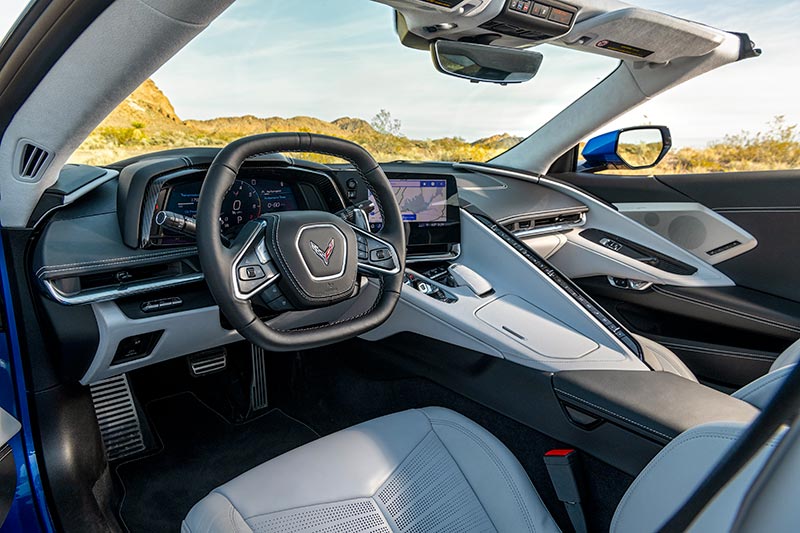 The brand-new eight-speed dual-clutch transmission is a far more sophisticated unit than the GM 8L90 torque-converter auto fitted to the C7 Corvette, slashing shift times, as well as instilling a much more connected feel when activated via the paddle shifters. There’s no conventional manual ’box on offer, but the dual-clutch unit is so fast and responsive that you’re unlikely to feel short-changed, even if you like having three pedals.

Here’s the really good part: the C8 isn’t merely a straight line bully that turns to blancmange when you fling it at corners. We tested a car with the Z51 Performance Package, which includes goodies such as Michelin Pilot Sport 4S tyres, firmer suspension, bigger brakes, enhanced cooling, sports exhaust, electronic limited-slip diff and an aero package that adds downforce. 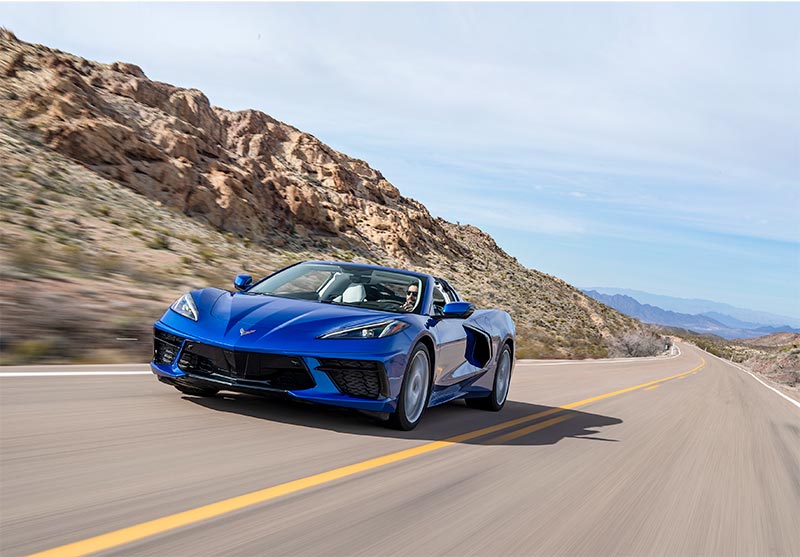 So, that’s the recipe and what it adds up to is an absolutely cracking driver’s car that delivers far more than I had expected of it. We tested the C8 in the United Arab Emirates and the winding and occasionally patchy roads around Hatta – about an hour out of Dubai – seemed a fitting test lab for the new-age ’Vette. Having dialled into the car after covering 100 or so kilometres, it became clear there’s eye-opening levels of grip to tap into and great balance in the chassis. The slightly odd hexagonal-shaped steering wheel relays plenty of feedback to your fingertips, encouraging you to really lean on the car and get it dancing on its tiptoes. The eight-speed dual-clutch transmission is also quick and seamless, especially when you’re pressing on, as opposed to pootling around.

The test car we drove was fitted with optional Magnetic Ride Control dampers, the firmness of which can be adjusted by selecting either tour, sport or track mode. The first of these settings provides a nice, supple ride, which was a bonus when I inadvertently ended up on a bumpy gravel road for about 20 km after a navigational bungle. This off-road excursion demonstrated the fact the Corvette is well suited as a daily driver, rather than being a harsh-riding one-trick pony.

Slightly on the minus side, ingress/egress is more challenging than in past Corvettes, and the length of the doors means you need ample room to open them to a reasonable angle. So, make sure you avoid parking spots where another car might slot in close to you. Luggage space is quoted at 357 litres, which sounds okay on paper, but a set of golf clubs and some soft luggage is pretty much the limit in terms of how much you can stash in the front and rear storage compartments.

Three days with the C8 seemed too few, and it was with a pang of regret that I handed the car back to its minders. I’m still not sold on its looks and may never be, but the latest ’Vette knocks it out of the park in almost every other respect. It’s proof that dramatic change can sometimes be for the better.

No longer an engine out-front sportscar, the Corvette has morphed into a serious supercar. Tactile, powerful, fun… the complete redesign has been a huge success.