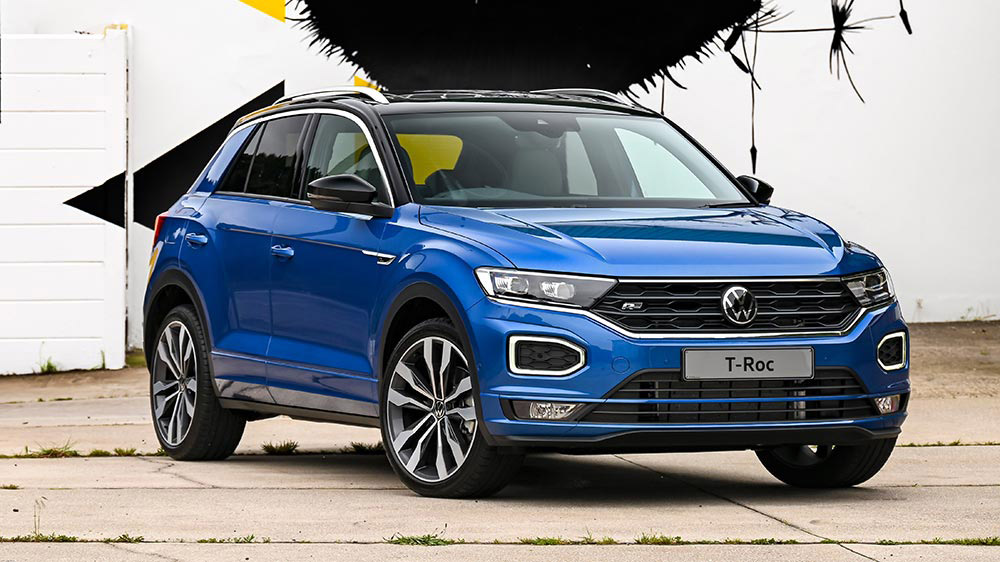 Fitting between the practically minded T-Cross and Tiguan, the T-Roc is Volkswagen playing with the fabric of what makes a compact crossover.

It’s become a cliché to ramble on about the burgeoning popularity of SUVs and crossovers but ramble we must when discussing the new Volkswagen T-Roc. Such is the level of dominance of these raised ride-height creations in the market that the German brand’s new midsize crossover is the fifth T-model in its range (at least according to VW, which counts the Tiguan and its seven-seat Allspace variant separately). Whatever your opinion on crossovers – I’m certainly more partial to a traditional hatchback or sedan – they’re here to stay. Handily for VW, the T-Roc is one of the best but there are a few caveats… 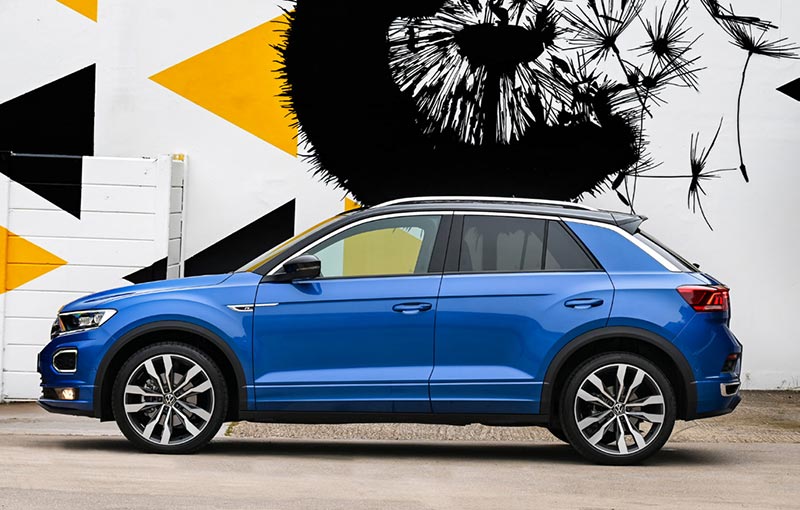 Longer but lower than the wildly popular T-Cross and more compact than the Tiguan (it’s 252 mm shorter), the T-Roc cuts a dashing figure that’s closely aligned to that of the donor Golf 7 (they share an MQB platform plus hardware and interior touchpoints). There’s between 158 and 161 mm of ground clearance depending on the derivative, which is just about sufficient in the crossover stakes, and a seating position that’s somewhere between that of a hatchback and an SUV. Think Toyota CH-R – one of the T-Roc’s main rivals – and you get the idea.

VWSA offers three models, an entry-level 1.4 TSI Design (breaking with Comfortline/ Highline trim designations) boasting a 110 kW/250 Nm turbopetrol coupled with an eight-speed Tiptronic transmission in place of the more common DSG, as well as two 2.0-litres, both with 4Motion all-wheel drive and seven-speed DSG ‘boxes. Trim lines are Design and R-Line reviewed here, and there are up to 20 exterior colour combinations alongside a few visually interesting interior hues.

To the interior, where Volkswagen usually sets the tone for premium-feeling fit and finish. Except, this time it doesn’t, but more on that in a bit.

In terms of easy functionality, the T-Roc is at the front of the class. Both Design and R-Line options feature the brand’s familiar Composition Media infotainment pack with an eight-inch touchscreen, dual-zone climate control – using solid, “old-fashioned” buttons and dials – and optional Active Info Display. The touchscreen setup is simple to use because popular functions aren’t hidden deep in various menus. Sat-nav is optional, as is a Beats audio system, but each occupant of four has access to a USB port.

Finding a suitable driving position is a doddle thanks to extensive seat and steering column adjustment and indulgently comfy chairs (I know of no other brand except Volvo that does basic seating comfort so well). 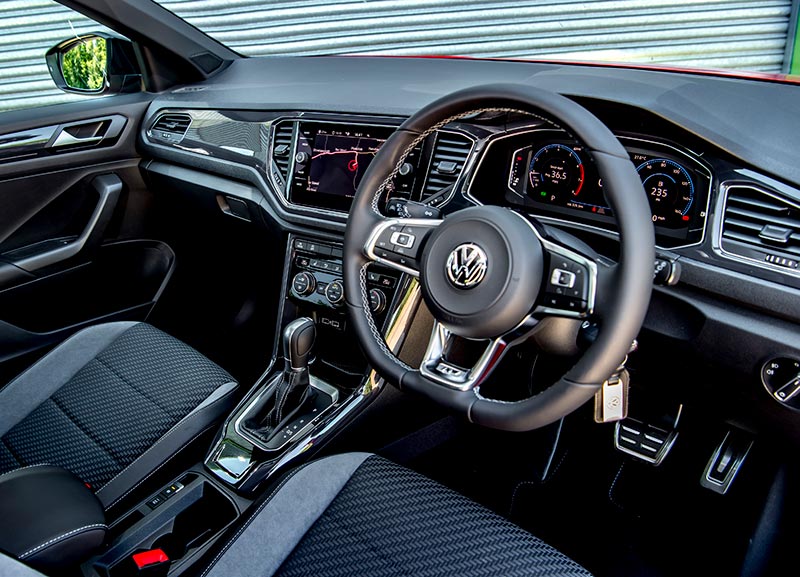 However, as I mentioned, there are some issues. While fit and finish are excellent and the ambient lighting imbues the interior of the T-Roc with a subtle sense of elegance, there aren’t any soft-touch plastic surfaces on the dashboard and door tops to boost the impression of luxury (or the premium pricing strategy). What’s more, legroom in the second row is tight (I couldn’t comfortably fit my 1.85-metre frame behind my ideal driving position) and luggage space on 4Motion models is reduced from a claimed 445 to 392 litres. An ideal midsize family car the T-Roc isn’t.

It certainly feels more hatchback than SUV once the R-Line’s 19-inch alloys are rolling. This configuration of the 2.0-litre engine is new to our market and boasts 140 kW and 320 Nm from 1 500 through 4 400 r/min. It’s a great powerplant – punchy yet frugal (we saw an indicated 7.8 L/100 km average during a week’s spirited driving in the confines of Cape Town’s City Bowl and further afield) – and melds seamlessly with the DSG option. At highway speeds, it fades into the background … which is exactly the point at which tyre roar becomes intrusive. The Design’s 17-inch wheels kick up less of a fuss, which suggests sticking to the smallest diameter if refinement is a priority (18s are also offered). Of course, that’s not an option on the R-Line, which adds sports suspension to the package for a ride that’s undoubtedly firmer than some buyers would expect. At speed, it smooths out and falls into that easy-going, fuss-free rhythm that’s such an appealing characteristic of all Volkswagens, but scarred tar taken at urban speeds are met with thunks and jostling. I’d suggest also test driving a Design model if it’s available before you make a choice.

If I sound too critical about the T-Roc, it’s because it does so many things so well that its shortcomings are cast in sharp relief. As it stands, the somewhat cramped interior won’t bother those owners who don’t have families (of which many apparently showed interest in the T-Roc in the months leading up to its launch) and some people simply don’t care that a dashboard doesn’t give when prodded. Others, meanwhile, may find the R-Line’s tough ride entirely acceptable. 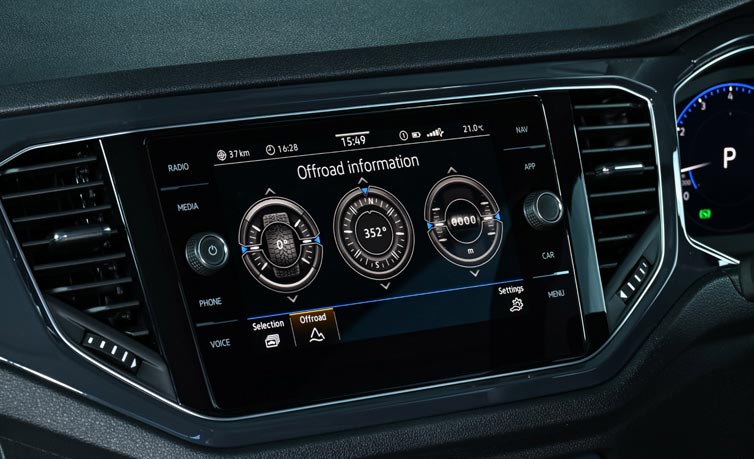 However, these issues are worth noting in the context of the R-Line’s near-R600 000 price tag, jutting this flagship derivative into terrain occupied by the objectively superior Tiguan. There’s much better value to be found in the T-Roc 1.4 TSI Design, which offers only slightly less brawny performance, boasts all the spec most buyers could want or need, and slashes more than R100 000 from the cost. Specified thus far, the new T-Roc is one of the midsize-crossover market’s best cars.

Billed as a new breed of Peugeot, meet the new 408

Regarded as the "Holy Grail" of Capris, a Ford Cap

Billed as the ultimate Continental GT variant, the

Watch Wednesday - Paying tribute to a love of fine